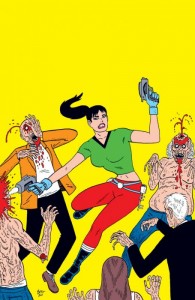 Gilbert Hernandez has been creating a lot of “B-movie” comics lately, but perhaps not in the manner that you’re thinking. One of his characters from “Love & Rockets,” Fritz, is an actress that stars in a lot of B-movies. In recent years, it’s clearly amused Hernandez to create graphic novels of those films. That was apparently the initial idea for “Fatima,” but in the actual telling it evolved into its own, unique, non-Fritz story.

All of that is a long way of saying that “Fatima” is going to remind you a lot of a slightly cheesy, slightly fun horror film.

In the world of “Fatima,” there’s a drug called spin that is so amazing that people can’t help themselves from wanting to use it, even though it eventually turns you into a zombie. The situation’s gotten so bad that Fatima is part of a hit squad that goes out and kills zombies, no questions asked. In many ways, spin is an extension of some other, real-world vices (some legal, some not) that will eventually kill the user; spin just does it in a faster and more bizarre manner.

While the idea behind spin is an intriguing one, it’s worth noting that “Fatima” #1 doesn’t dwell on it too much; sure, there are some evil corporate men who claim to have a “cure” for spin that makes it non-lethal, but that’s not the center of “Fatima.” Rather, it’s Fatima and company shooting the heads off of zombies, over and over and over again. It’s not a book to be taken too seriously, at least not in this initial chapter. Rather, it’s a comic version of the popcorn flick; lean back, turn the brain off and enjoy the visuals.

That last part is especially true here because of “Fatima” being drawn by Hernandez. I love his art and it’s looking fantastic here. The opening splash page is just gorgeous; Fatima in a dark cloak up on the rooftop, with the sky being formed out of thousands of little lines that create a beautiful textured pattern. That kind of attention to detail goes throughout all of “Fatima” #1, from the tweed in people’s blazers to the dozens of little drops of blood that explode out of people’s heads every time Fatima shoots them. Add in Hernandez’s legendary beautiful characters — they’re full-figured, energetic and drawn with a soft rounded line — and you end up with some dazzlingly great art.

Is “Fatima” #1 slightly ridiculous? I’d say so. But between Fatima using her two hairdryer-sized guns to blast off people’s heads, and the best use of gratuitous bikini-wearing background characters, and I don’t care. It’s silly, it’s fun, I’m definitely going to read the rest, too.