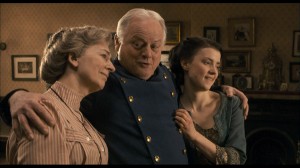 The first-ever feature-length film bringing to life Franz Kafka’s 1915 tale Metamorphosis is complete, and we have a trailer for you that gives a few sneak peeks at the giant bug around which the story revolves as well as news of where the film will officially premiere.

Metamorphosis is directed by Chris Swanton and stars Chris New, Robert Pugh, Maureen Lipman, Laura Reese and Chloe Howman. The film is scheduled to premiere at the 6th Annual B-Movie Celebration held in Franklin, Indiana, on September 14 and 15.

Fans of Kafka’s story will be thrilled to know that director Swanton tried to stay as close to original tale as possible. Dig on the trailer below to get an idea of how Metamorphosis will look on the big screen. Thanks to Avery G. for the tip on this one!

Synopsis
Metamorphosis is the story of a traveling salesman who wakes up one morning after disturbing dreams to find himself transformed into a giant insect-like creature. The narrative then traces the interaction of Gregor and his family as he slowly starves to death for want of the right kind of sustenance. But what effect does his life and death have on his family?