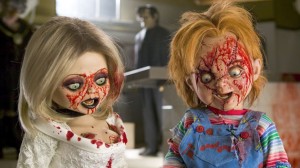 We’re spent a lot of time talking about Child’s Play at CraveOnline. Witney Seibold spent weeks pouring over every film in the implausibly popular homicidal doll series over at The Series Project. Now it looks like he’ll have to gear up for at least one more: the franchise is coming out with its first sequel since 2004’s Seed of Chucky. The good news is that Brad Dourif is back as the voice of Charles Lee Ray, the killer whose soul was shunted into a malevolent piece of plastic. The bad news is… it’s going straight to DVD.

MovieHole declares that Don Mancini, who wrote the entire series and directed the last installment, is back to helm the sixth film, Curse of Chucky. The release is expected to be a major about-face from the self-referential and jokey tone of the previous two films, in an attempt to make the series “scary” again. The plot follows a young wheelchair-bound woman dealing with the death of her mother and forced to live with her extended family in the aftermath. When people start turning up dead, she makes the only logical assumption and starts to suspet the doll that mysterious arrived days earlier.

Can Curse of Chucky, well, lift Chucky’s curse? Aside from a few camoes in Hack/Slash, Charles Lee Ray has been AWOL for eight years now. Maybe enough time has passed that audiences are prepared to take Chucky seriously again. Then again, maybe they’ll assume that a straight to DVD release like Curse of Chucky shouldn’t be taken seriously from the get-go.