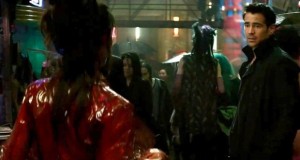 Sony have released a brand new trailer for their upcoming Total Recall remake. And anyone hoping that it would be more faithful to the short story ‘We Can Remember It For You Wholesale’ by Phillip K. Dick will be disappointed as it looks more like a cross between Paul Verhoeven’s original adaptation and Chris Nolan’s Inception.

Colin Farrell plays Douglas Quaid, a frustrated factory worker who decides to visit Rekall so that they can implant a fake memory in order to turn his dreams into a reality (in his head). However the procedure goes wrong and Quaid finds himself a hunted man who has to question what’s real and not real.

The trailer has some new scenes between Colin Farrell and Kate Beckinsale who plays Lori, Sharon Stone’s role in the original. There is also a small tease showing Bryan Cranston as Cohaagen. But the main emphiesis of the trailer is on the action which looks like its been turned up to 11 and is very impressive. This Total Recall was always going to struggle to compete with Schwarzenegger’s original and it appears that by upping the action, it hopes to find its own identity.

You will also notice a couple of nods to the 1990 movie with Colin Farrell uttering ”If I’m not me, then who the hell am I?” and an appearance by the the infamous three breasted prostitute who informs Quaid;

Director Len Wiseman has reportedly shot three different versions of the scene with the woman with the extra breast so that anything that is censored for the PG-13 theatrical release can be added back in on the DVD.

Many people (myself included) have been quite sceptical of this remake but I have to admit that this trailer has certainly made me sit up and show a bit more interest than I have before.

Total Recall opens on August 3 in the US and August 29 in the UK. You can check out the new trailer below.