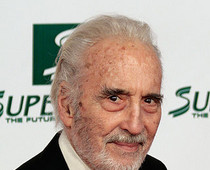 Acting legend Sir Christopher Lee, who turned 90 on May 27, announced on Friday that he will be releasing a second heavy metal album, titled Charlemagne: The Omens of Death, which will be released this summer. The first single, “Let Legend Mark Me as the King,” can be purchased at Amazon.

Lee’s first album, Charlemagne: By the Sword and the Cross, was released in 2010, when he was 87. It was a concept album telling the story of King Charlemagne, the first emperor of the Holy Roman Empire. It features two bands performing, along with a 100 piece orchestra and various guest vocalists.

Lee was awarded the Spirit of Hammer Award for the album, which was presented to him by Black Sabbath guitarist Tony Iommi at the Golden Gods Awards in London in 2010.