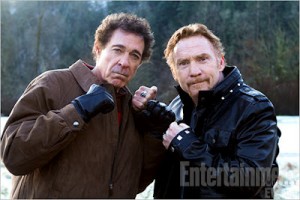 The new Syfy made-for-TV movie Bigfoot (Space, 9 p.m.) is indeed new, and is not to be confused with the Discovery Channel’s tongue-in-cheek docu-reality series Finding Bigfoot.

This Bigfoot is a B-movie throwback to the sci-fi exploitation flicks of the mid-1950s, when movie epics such as Tarantula and Creature from the Black Lagoon made an entire Cold War generation of young ’uns fearful that atomic spiders the size of pickup trucks really did exist, and that swimming with no clothes on in Amazon River tributaries was a very bad idea.

And they say you can’t learn anything from watching TV.

Bigfoot will air here on SPACE, on the same night and time it makes it’s debut on Syfy in the U.S. It follows in the grand tradition of such made-for-TV Syfy epics as Jersey Shore Shark Attack and Arachnoquake.

Bigfoot’s premise is simple – a DJ (The Partridge Family’s Danny Bonaduce) and a conservationist (The Brady Bunch’s Barry Williams) form an unlikely union to combat a marauding Bigfoot – and the promo is even simpler: “To save, exploit or be killed by Bigfoot? That is the question.”