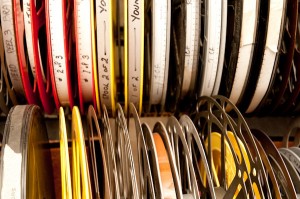 It was a pleasant surprise to see about 75 Arcadia residents of all ages show up on the patio of the Arcadia Historical Museum on Friday night to watch a 73-year-old black-and-white movie that most had never heard of. We all brought our own lawn chairs and beverages and settled in to watch the movie, which shown against the wall of the museum building.

Due to the popularity of a recent exhibit at the museum featuring memorabilia about movies filmed in Arcadia, museum curator Dana Dunn decided to schedule the 69-minute showing of Long Shot to see whether enough people would be interested to have such showings more often.

The corny B movie was about a young lady whose horse beats the odds to win a big race, allowing her to turn down the wedding proposal of a rich con man. The biggest star was the actor some attendees recognized as the doctor in Gone with the Wind, which had been released the same year. Long Shot was billed as having been filmed largely in Arcadia, with many scenes shot at Santa Anita Park.

Well, that may have been true, but it wasn’t at all obvious, since there was little that was recognizable from the pre-TV and pre-World War I era of Arcadia. Even the horse race track and facilities were barely distinguishable as Santa Anita until the last few minutes when the plot of the movie involved the horse at the center of the story being entered in the Santa Anita handicap.

But it almost didn’t matter whether our town was recognizable in the movie or not—everyone seemed content to simply enjoy coming together to see a cinematic curiosity on a lovely evening. It all felt quite quaint and enjoyable.

It would be nice to see this program continue, with other obscure films that have an Arcadia connection, or even more mainstream films and TV shows with familiar Arcadia locations, from The Marx Brothers’ A Day at the Races to Fantasy Island.