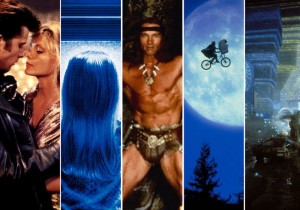 Believe it or not, there was a time when the weekend box-office grosses were not news — unless you were in “the biz” and subscribed to Variety or The Hollywood Reporter.

And why would they be? Most movies were released to different markets over the course of weeks or even months. In most cases, you wouldn’t know a movie was a flop until a year had passed.

Arguably, the watershed year for that bygone era was 30 years ago, 1982, the year Steven Spielberg released a movie about a boy-and-his-alien-in-the-closet called E.T. the Extra-Terrestrial. It coalesced everything we now associate with Spielberg’s oeuvre — special effects, friendly aliens (first hinted at in his earlier Close Encounters of the Third Kind), amped-up emotional manipulation and a gooey sentimentality toward the suburbs. Middle America had found its iconographer.

Pop culturally, almost everything out of E.T.’s mouth became a catchphrase — “Phone home,” “Ouch,” “Ell-i-ott” — and anything associated with it turned to gold (oh, to have owned a “piece” of E.T.’s favourite candy Reese’s Pieces).

Blockbusters were not new, of course. Spielberg himself had raised the bar of financial expectations (and some say, created an environment where accountants took creative control of movies) in ’75 with Jaws. Star Wars carried the dynamic further.

But ’82 and E.T. were when Spielberg really began to re-create Hollywood in his own image. Also in the top-10 that year was Poltergeist (“They’re heeere!”), a horror film he produced based on noise, FX and non-stop screaming (dotted with canny moments of suspense by The Texas Chainsaw Massacre’s Tobe Hooper).

Otherwise, moviewise, 1982 looked a lot less like what came before, and a lot more like what we would recognize today. Two of the Top 10-grossing movies, for example, were sequels, Rocky III and Star Trek II: The Wrath of Khan.

In a foretelling of Avatar vs. The Hurt Locker, the Oscars would be a contest between a massive commercial hit (Gandhi) and an art-house favourite (Sophie’s Choice). Gandhi would win best picture and best actor (for Ben Kingsley), and Meryl Streep would win best actress, a trophy she would not hold in her hands again until this year (when she won for The Iron Lady).

As for Spielberg, his commercial triumph E.T. received Oscar noms, for best picture and director. But it was never a serious contender, and neither was Spielberg for the next decade, until Saving Private Ryan and Schindler’s List gave him the artistic cred that long eluded him.

But, arguably, the most important movie news was happening offscreen. The year 1982 saw the price-point of VCRs finally drop to the point of affordability (I bought my first VHS recorder in ’82 for $900). Video rental stores began popping up with increasing frequency, although the birth of Blockbuster was still three years away. Nonetheless, a generation of home movie rentals was underway.

In Canada, the big news was Porky’s, Bob Clark’s contribution to the horny-teenager comedy genre, which seems quaint by today’s standards, but became a national embarrassment to some — holding the title for highest-grossing Canadian film, both domestically and internationally, for more than a quarter-century. It would eventually be eclipsed by Bon Cop/Bad Cop domestically, and by Resident Evil: Afterlife internationally. Adjusted for inflation, however, Porky’s still rules!

Another Canadian who did extremely well in ’82 was singer/songwriter Buffy Sainte-Marie. Her song Up Where We Belong, as sung by Joe Cocker and Jennifer Warnes, was the theme song for the Richard Gere/Debra Winger movie An Officer and a Gentleman, and was one of the most-played songs of the year.

Stars introduced in 1982 included Sean Penn as the consummate stoner/surfer Jeff Spicoli in Fast Times at Ridgemont High, John Lithgow as a transsexual in The World According to Garp, Michelle Pfeiffer in Grease 2 (though nobody saw it, inexplicably, everybody noticed her in it) and Arnold Schwarzenegger in Conan the Barbarian (in which he philosophized on the question, “What is best in life? To crush your enemies, to see them driven before you, and to hear the lamentations of their women.” It’s a strategy that would later see him elected governor of California).

For Fast Times’ Jennifer Jason Leigh, ’82 was triumphant and tragic. The movie launched her career, but her father, Vic Morrow was killed, decapitated by a helicopter, along with two child extras in a scene directed by John Landis for the horror trilogy The Twilight Zone. Landis would later stand trial and be acquitted of involuntary manslaughter.

Barry Levinson’s Diner came out, a sleeper comedy mainly about guys kibitzing over lunch. Now considered a classic (and a template for Seinfeld), Diner almost didn’t get made, so turned off were studio types by its naturalistic dialogue and lack of “action.”

Making Love — about a love triangle between Clash of the Titans’ Harry Hamlin, Charlie’s Angels’ Kate Jackson and Canadian Michael Ontkean (Slap Shot) — was touted as a breakthrough for the gay community. But (a) it bombed at the box office, and (b) was a breakthrough only in the sense that it inspired a cynical career strategy for straight actors “taking risks” by playing gay.

That year, Ridley Scott’s Blade Runner proved that, sometimes, movies with mixed reviews are more likely to become classics than ones that inspire universal thumbs-up. (Harrison Ford still doesn’t “get” that movie.)

And, finally, for Mel Gibson, 1982 was the year when The Year of Living Dangerously was the name of a movie he starred in, and not a catch-all description for his irresistible urge to torch his own career, year after year.

Jessica Biel — A-list hottie. No, not Jessica Alba, the other one.