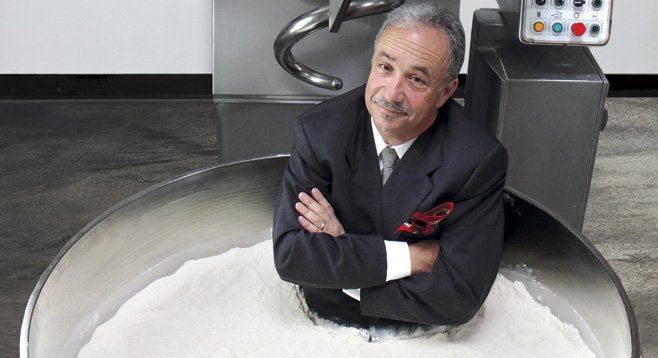 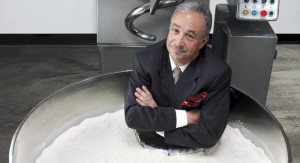 Behind the glass that separates the kitchen from the customers at Bread & Cie Bakery and Café in Hillcrest, steam heat pours from the oven. Bakers in long aprons and French bonnets lift loaves of artisan bread from the oven and place them into baskets.

Patrons gather at the wraparound counter, pointing to this loaf or that quiche as the line to order swells. Order-takers with earrings and tattoos help the customers.

If he sees the line beginning to snake, Charles Kaufman, owner of Bread & Cie, assists the staff in taking orders while entertaining hungry people by cavorting and telling jokes. At 62, he moves nimbly around his bakery. Kaufman looks distinguished, despite an REI outfit and Merrill Walkabouts. He swears he “never intended to be a bread-maker.”

Kaufman grew up in New York City. When he was eight years old, his mom took him to see his first show, Ethel Merman in Gypsy. Upon viewing that “first set of boobies in the strip-dance scene, I knew exactly what field I would go into,” Kaufman laughs.

Despite a stutter, he dreamed of being an actor; his hopes and ambitions were encouraged. “My dad was an independent lawyer who moonlighted in amateur theater,” Kaufman says. “My mom was an unconventional narcissist with a passion for Broadway. It fit.”

Kaufman grew up in midtown Manhattan. His address, a brownstone on 65th, between Park and Third avenues, screamed privilege. At five, he was sent to Trinity Academy, one of the best all-boys’ schools on the Upper West Side. “At the time, I didn’t think I was privileged. I didn’t think it was a privilege to be away from my family from 8:00 a.m. until 6:00 p.m. every day.”

Kaufman tried to get his parents’ attention when he was home. “My parents were very busy with work and philanthropy.” He found his way by being funny. For a year, he carried a puppet around and talked in a puppet voice. “That fell flat after awhile, especially after my parents brought me to a shrink.”

He began telling jokes. His mom took notice. “I lived for making her laugh, and I knew very young that if I could make her laugh, she’d be pleased with me. There was nothing quite like that feeling of approval and comfort.” Also, if he told a joke and people laughed — validation that they enjoyed his company — he wouldn’t stutter.

Kaufman enrolled in classes at the Stella Adler School of Acting. “I remember being onstage for scene-study for what felt like hours, as my partner would wait for me to say my lines.” He grimaces. “My acting career didn’t last long.”

In high school, he was class president. “I lost many nights’ sleep before speeches, but I knew if I could just make them laugh, I could get through it.”

He graduated from high school in 1967 and went on to college at the University of Connecticut. He was accepted into UCLA’s graduate film school, graduating with honors in 1973. “My first real-world job out of film school was as an intern for NBC Studios in Burbank.

“I was given the clandestine task of driving to Bob Hope’s house to pick up paper ‘receipts’ that contained the topics Hope wanted to cover in The Bob Hope Show.” It was live television, and Hope left nothing to chance: the receipts had to be delivered in haste to Hope’s writers. “He was very secretive and didn’t want his topics getting out.”

A mixing bowl lift drops 300 lbs. of dough onto a table. It will be cut and placed in plastic bins to be sent to a temperature-controlled proofing room for the dough to rise.
Every day, Kaufman would drive to Hope’s house in Burbank, pick up the slips, then drop a slip off at each of the show’s writers’ homes. Some lived in the Valley, some across town in Culver City, near the airport. “The trip would take hours. I’d get lost all the time.” Kaufman would wait for the writers to come up with material, then he’d drive it back to Bob.

“Sitting in traffic in my red 1968 Volvo, on the dusty, hot, polluted streets of Los Angeles was torture. In order to keep myself entertained, I’d peek at Mr. Hope’s topics. If the receipts said he wanted jokes on ‘inflation’ or ‘Nixon,’ I’d come up with my own jokes and tell them to a make-believe audience. Other drivers must’ve thought I was nuts.”

He began writing his own gags and sneaking them into the pile with the paid writers’ submissions. When Kaufman wrote, he didn’t have a speech impediment. “I had great timing on paper.”

Hope and the producer of the show figured out that additional scribbled jokes were coming in on the sly. After reading Kaufman’s gags, they knew their intern had comedic talent. They offered to hire him as a writer, as long as he passed a typing test.

Kaufman didn’t know how to type, but “I told them I did.” Determined to begin his writing career, he spent three days hunkered over a Remington typewriter, teaching himself. “This was a job writing jokes for Bob Hope. I was going to walk barefoot over hot coals, if I had to.”

He passed the test, got the job, and worked as a writer on The Bob Hope Show for four years. What he remembers most about that time is how Bob Hope wouldn’t laugh when he thought something was funny. He’d read through the “gags,” checking off the pieces he wanted to use by saying “That’s funny, that’s not funny, that’s funny” as he went down each writer’s list. “This guy was such a pro, he didn’t have to laugh, he just knew.”

To this day, Kaufman doesn’t think Hope knew his name. “I tried to distinguish myself by wearing a jacket and tie every day, but it only made the other writers think I was a twerp.” He wanted to make an impression, stand out somehow. Now, he laughs: he made such a big impression that, when the show went off the air, “Mr. Hope gave me a keychain with his picture on it.” 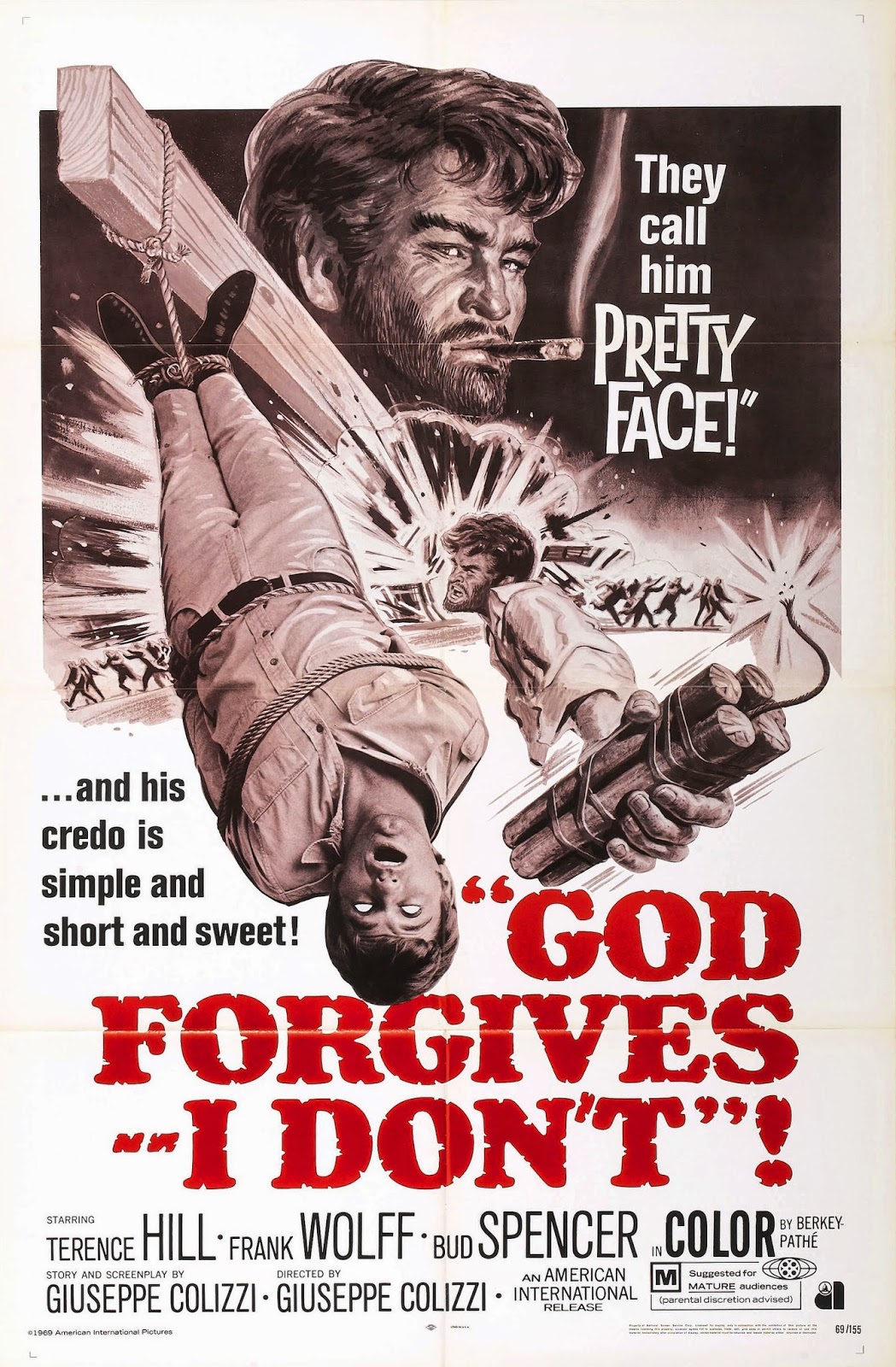 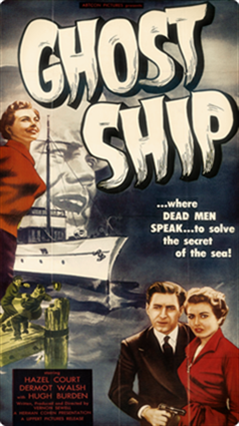 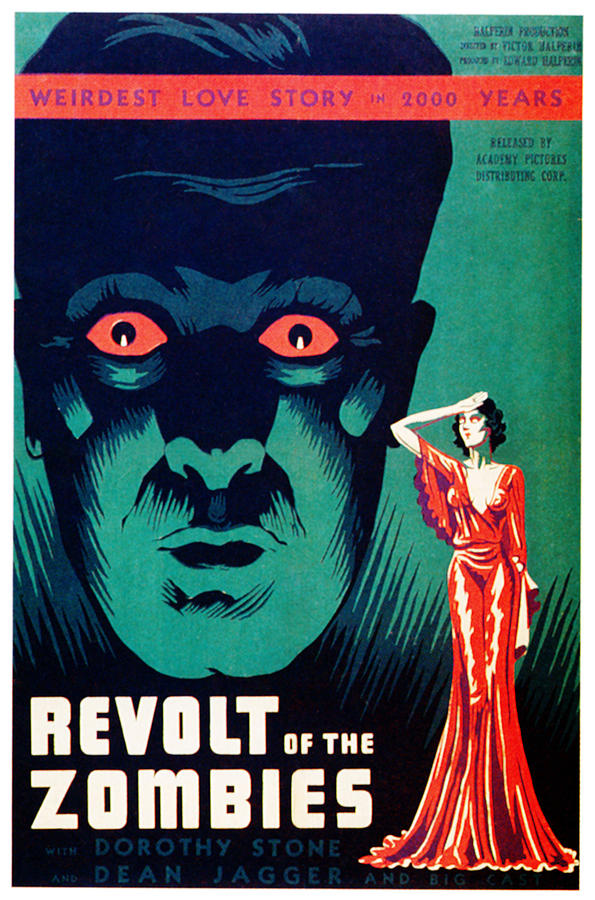 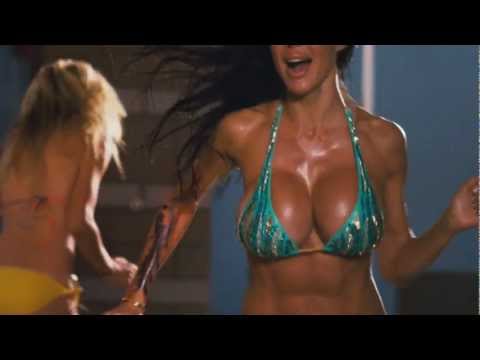