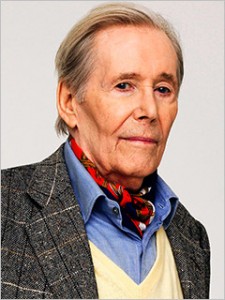 Peter O’Toole, the dashing, singularly voiced British actor whose career launched 50 years ago with Lawrence of Arabia, announced his retirement today, at 79. You can read his statement below:
Dear All,
It is time for me to chuck in the sponge. To retire from films and stage. The heart for it has gone out of me: it won’t come back.
My professional acting life, stage and screen, has brought me public support, emotional fulfillment and material comfort. It has brought me together with fine people, good companions with whom I’ve shared the inevitable lot of all actors: flops and hits.
However, it’s my belief that one should decide for oneself when it is time to end one’s stay.
So I bid the profession a dry-eyed and profoundly grateful farewell.
Ever
Peter O’Toole
O’Toole has been nominated eight times for Best Actor, most recently in 2006 for the British drama Venus; although he has never won the award, he did receive an Honorary Oscar in 2003. He’s played everything from kings (The Lion in Winter) to schoolteachers (Goodbye, Mr. Chips), larger-than-life directors (The Stuntman) to imperious food critics (Ratatouille). He most recently appeared last month in For Greater Glory: The True Story of Cristiada, starring Andy Garcia, Eva Longoria, Bruce Greenwood, and Oscar Issac.
The statement provided by his reps noted that O’Toole will be “spending his time working on the third volume of his memoirs.”