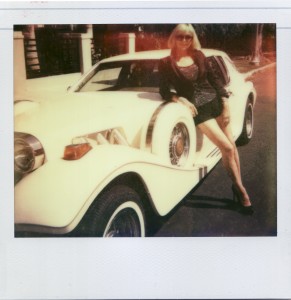 Early in her career, Hollywood labeled Sybil Danning the B-Movie Queen, a title she continues to embrace and defend. Where else but the B’s would a lusciously confident woman transcend her bombshell image, do her own stunts, and give Arnold Schwarzenegger a run for his money? Seeing Sybil Danning load a machine gun and wipe out scum was an inspiration, busting open the action film genre for women.

VICE: You have been in 76 films. Did you ever want to cross over to the mainstream and be in a big Hollywood picture?
Sybil Danning: I’ve done a lot of comedies but I don’t think I am romantic comedy material, and those are the bulk of the movies offered to women on the A-list. I’m just better suited playing authoritative and strong-willed characters, and the B’s allow me to do that.

You did a series of films in Europe before breaking through in American film. What was that transition like?
When I first came to Hollywood I had no agent, no manager, and no engagement waiting for me. After doing Bluebeard, a big Hollywood picture shot in Europe, I was offered to star on a stage in Germany. I had to make a decision between the stage and Hollywood, and I chose Hollywood. I was here for three months before landing my film Battle Beyond the Stars with Roger Corman.

Wow! You were here only three months and you landed a film that turned out to be a cult classic. You are very lucky! That film also boosted James Cameron’s career.
Yeah! He built my cool little dart spaceship. I love and am very proud of that movie.

At the time, how did you feel about doing serious films abroad like Operation Thunderbolt opposite Klaus Kinski and then coming to America and being in Battle Beyond the Stars, which is in undoubtedly a B-movie?
I have never doubted the significance of a B-movie. A and B are just letters. Nowadays the studios are essentially making B-movies with A movie budgets. Seeing all these superhero films come about I giggle and think, That’s exactly what Roger Corman was doing 30 years ago. In the 80s, the studios weren’t making action-adventure films starring women. You see, the Reagan era was a very macho era. We had Rambo and Commando, and there were few roles where women played the dominant character. I wound up doing B-movies because that is where all the good, strong characters were available for me to play.

There were very few women even in those movies! Being an extremely beautiful woman, I imagine Hollywood would want to make you an object of desire. How did you steer your career away from that to become a gun-wielding heroine?
It was very difficult. When I first came to Hollywood I was considered the new meat in town. Producers would want me to go with them to Palm Springs for the weekend to talk about the possibility of a role and whatnot, so I steered away from that. I had a great manager who helped me land the kind of roles I wanted to play. For instance, I was offered the role of the wife of the President in the film Amazon Women on the Moon. My manager and I went in to see Robert Weiss, who ended up directing my episode in the film. Thankfully my manager could read upside down and saw the part of Queen Lara sitting on the secretary’s desk. He said, “Excuse me, there is a Queen in Amazon Women on the Moon? Well, that would be the perfect role for Sybil to play.” So here I was already in the office to see the director for the role of the wife, and my manager said, “No, she is going to play the queen.” It helped to have someone who believed in me.

How did you come to host Sybil Danning’s Adventure Video series?
Again, it was my manager’s idea. He saw that Elvira was hosting horror movies so he pitched the idea of me hosting action film wraparounds since I had already done a bunch of films and it had become my genre. I would do introductions to films like Mean Freak and Crazy Tony and other little movies with nobody in them that they didn’t know how to sell. The videos became very successful, and because I was all over the box but not in the actual movies, people started to complain. That opened up the door for me to star in more action films because the sales proved I could sell a movie just by being on the box. They offered to fund a film that I was in, knowing they could sell it just by being on the box. So that’s how LA Bounty happened.

Many of your fans, including me, credit you with your stellar ability of creating the illusion of appearing nude without actually being nude.
I strongly believe not bearing all is actually sexier. I have no problem posing nude though, as long as it’s on my own terms.

Is that why did you did Playboy?
I wanted to make a point, and they offered me a lot of money. However, I made sure that my contract guaranteed me the cover as well as the centerfold, kill rights, and the right to pick my own photographer.

You wore leather and chains, and that spread is very sensual. Are you aware that you also have a lot of fans in the S&M community?
Yes, and I am very proud of that. It’s funny, because in Austria everyone wears leather. We think nothing of it. I remember one time I wore a beautiful black leather jumpsuit to the premiere of Close Encounters of the Third Kind. It was full of zippers and I wore it with these great boots. When I showed up to the premiere my agent pulled me aside and said, “That’s very attractive, what you are wearing, but please don’t wear anything like that to a premiere.” What he didn’t understand was that it was all the rage in European fashion. I suppose the states are a bit more conservative in their fashion.

Do you find it’s more challenging to find dynamic roles as you get older?
Absolutely! But if Schwartenegger and Stalone can still star in action films, so can I.

What do you love about being an action movie star who totes a gun?
I think guns are sexy although I would never hunt down an animal. I like to prey on the scum: child molesters, drug dealers, men who use and torture women. I have no problem shooting them and asking questions later.