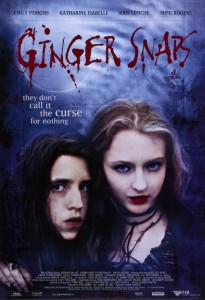 It’s interesting to see when a horror movie gets labeled ” legitimate” by the press. In the case of Ginger Snaps, much ballyhoo was made by the alternative weeklies about how this kind of horror movie was “acceptable” because it wasn’t really about horror, it was a feminist coming of age film about the “horror” of puberty. Unfortunately, this attitude probably only served to scare away the intended audience.
The main characters of Ginger Snaps are the morbid and inseparable sisters Ginger and Brigette. Ginger is only a year older than Brigette, and is starting to enter into puberty. Brigette is concerned they will grow apart, but is more concerned about the reports of a wild animal that has been attacking dogs as it makes it way through their suburban neighbourhood. One night while the two sisters are out, Ginger is suddenly attacked by the creature. It looks like she might be dead, but she’s miraculously saved when local drug dealer and apparent high school drop out Sam accidently pulverizes the creature with his van.
As a result of this attack, Ginger becomes even more distant from her sister. Ginger smokes up and starts giving in to the romantic advances of a classmate that she previously spurned. Her sister doesn’t know if this is a result of the attack, or of Ginger’s raging pubescent hormones. Ginger shows her sister that her wounds healed extremely quickly and there is strange, coarse hair growing out of the cuts on her shoulder. This results in a humourous scene in the school nurses’ office, where she assures them that hair growing in places that it wasn’t before is a perfectly normal part of puberty. Worried about her sister, Brigette goes to ask Sam about that night. Pretending that she was the one who got bit and might be turning into a werewolf, the two of them try to figure out the best way to reverse werewolfism. The answer? In a truly 21st century twist, the pair decides that werewolves require a homeopathic remedy: wolfbane.
About this time, Ginger has sex with her new boyfriend and inadvertently turns him into a werewolf. Things get even worse as Ginger attacks and accidentally kills a girl who has been picking on Brigette. In a last attempt to save her, Brigette finds some wolfbane and takes it to Sam. They boil it up like it was heroin, and after the token “will it kill her or cure her” speech, she decides to try it on Ginger’s boyfriend first. It cures him, and now it’s up to Brigette to get more wolfbane back to Sam to fill another hypodermic.
This film is much more I Was a Teenage Werewolf (crossed with David Cronenberg’s The Fly) than Our Bodies, Our Selves. But this is not squeaky clean 1950s horror there is a moderate splash of gore, and although the special effects aren’t fantastic, they are on par with other effects-heavy Canadian fare like The Gate.