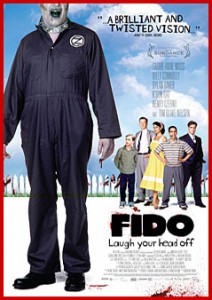 With the exception of George Romero’s Toronto-shot Diary of the Dead, Fido is the most anticipated Canadian-lensed zombie movie set for release in 2007for whatever that’s worth. The fact that it’s anticipated at all means something, though this isn’t another digital video cheapie lumbering in Romero’s footsteps, but an original shot-on-film zom-comor “zomedy,” if you preferwith recognizable name stars and a budget at the high end of “low” (according to Variety, it’s the highest budget indie film shot in British Columbia yet).
It’s not a horror film by any means, but a comedy that happens to be about zombies. Unlike the comparable Shaun of the Dead, with its ample gore and scattered scares, Fido takes the subgenre in a new direction by setting it in a sunny retro-1950s future where the zombie apocalypse came and went and humans carry on in the picket-fenced suburbs, thanks to the ZomCom corporation, inventors of a collar capable of rendering the flesheaters docile. Now everyone’s got an undead servant in a blinking neck clasp and ZomCom jumpsuit. Everyone, that is, except the Robinsons.
Bill (Dylan Baker) doesn’t like ’em, due to an unfortunate incident during the great Zombie War. His lonely wife Helen (Vancouver-born Carrie-Anne Moss), however, desperately wants to keep up with the Joneses and brings one home anyhow. Billy Connolly, in a perfectly subdued non-speaking role, plays Fido, the undead human Lassie to the Robinsons’ son Timmy (K’sun Ray). As Bill concentrates on impressing their new neighbour, head of Zomcom security Jonathan (Torontonian Henry Czerny), Fido slowly evolves from pet to pet/patriarch, in one of the film’s weirder twists.
Stranger yet is neighbour Mr. Theopolis, a former Zomcom scientist who thinly veils his scandalous relationship with own nubile zombie, Tammy. When Fido’s collar goes on the fritz with bloody results, Timmy turns to Theopolis for help, but it’s too late and the powers that be threaten to come between a boy and his best dead friend.
On the surface, there’s nothing particularly Canadian about this partially Telefilm-financed movie from Vancouver’s Anagram Pictures. Without waving flags, its obvious target is terminally repressed 1950s suburban America, yet the jabs are gentle. Director Andrew Currie, who co-wrote the film with Robert Chomiak and Dennis Heaton, is more interested in keeping things light and insular. Here the film succeeds marvelously with plenty of solid gags (the faux classroom educational film about Zomcom is particularly hilarious) played out in a Technicolor world where the zombies represent barely contained chaos in the face of manicured flower beds, Crayola houses and polished chrome bumpers.
Technically, the film is top-notch, which, ironically, led several viewers at the movie’s premiere at last year’s Toronto International Film Festival to praise it for not looking like a Canadian film. That’s not to say Fido isn’t Canadian at heart, though. The film has a very Canuck viewpoint, where it can stand outside of Americana and skewer it with a smirk. Among the funnier moments of the filmand it’s telling that these scenes got some of the biggest laughs among the TIFF crowdare those showcasing absurd gun violence. Target practice is part of everyday grade school curriculum, there’s a hunter trophy picture featuring a downed zombie and Bill slips Timmy his first pistol on the way to school, with a don’t-let-your-mother-find-out warning. Although not as wonderfully insane as Top of the Food Chain (a.k.a. Invasion!), Fido parodies American culture stereotypes in the same manner of John Paiz’s 1999 filmwith confident Canucklehead flair.