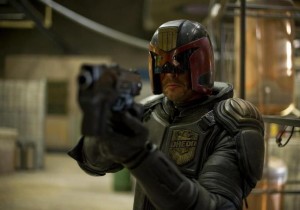 Remakes and reboots always seem to demand comparisons to their predecessors, but “Dredd” evokes a slightly different relationship: What Zack Snyder’s “Dawn of the Dead” is to George Romero’s original, Pete Travis’ film is to, no, not Danny Cannon’s 1995 film “Judge Dredd,” but Paul Verhoeven’s “Robocop.” In both cases, gifted visual stylists took fertile, socially-conscious subject matter, pared out the cultural commentary, and left behind an engaging, if empty, cinematic experience. And for the most part, that works, although the abrupt ending of Travis’ film only highlights its thematic vacuousness, while Snyder’s bleak post-credits punchline successfully disguised it (at least at the time). Nevertheless, by far the better of the two cinematic interpretations of this particular character, “Dredd” is a video game procedural tied to great visuals, but one without deeper substance to make its experience remotely meaningful.

Karl Urban plays Judge Dredd, the most fearsome scowl in all of Mega-City One. After dispassionately “judging” (that means kill) a trio of drugged-out criminals, Dredd is handed a babysitting job by his superior: evaluate a comely recruit named Cassandra Anderson (Olivia Thirlby) whose tests are below par but whose psychic abilities make her too valuable to dismiss. On their first call, Dredd and Anderson respond to a triple homicide at Peach Trees, a housing project which has been overtaken by Ma-Ma (Lena Headey) as a production facility for a new drug called Slo-Mo. But after they apprehend one of her foot soldiers, Kay (Wood Harris), for questioning, Ma-Ma shuts down the building and unleashes its denizens on the two Judges, putting them in a deadly struggle to escape with their suspect – and their lives – intact.

Fans of the character will be relieved to know that Dredd doesn’t face the sort of deconstructionist, deep-rooted moral struggle he was confronted with in Cannon’s film; from start to finish, the Judge retains his mostly implacable, gruff authority. Instead, screenwriter Alex Garland (“28 Days Later,” “Sunshine”) gives him a soupcon of humanity – not to mention humor – and then tests it incrementally both via his relationship with Anderson and his totalitarian attitudes about delivering justice. What works best about the duo’s dynamic is that Anderson isn’t a feeble-minded rookie, but a formidable companion whose skill set is simply different than Dredd’s. And when she introduces a few shades of grey into his black and white attitudes about crime and punishment, the transformation is rewardingly subtle.

At the same time, his transformation is never reflected in the larger ideas the film attempts to examine – mostly because it doesn’t seem like there are larger ideas. Anderson’s passing mention of her upbringing in a housing project like Peach Trees notwithstanding, the movie never pauses to contextualize their judgments, nor to contemplate the value – or danger — of a totalitarian regime. When innocents are killed, they only matter as a justification for their killers’ eventual, bloody death at the hands of the Judges. All of which is, if not fine, then at least intentional for the vast majority of the film’s running time; “Dredd” dares its target audience not to embrace the carnage, and alternates just enough between “that’s horrible” and “that’s horribly awesome” to keep viewers from seriously contemplating the glib amorality with which it depicts the (in)significance of human life.

Perhaps understandably, it sounds like I really didn’t like the film, but “Dredd” mostly works on its own terms – even if they were probably written in crayon. Travis’ direction, augmented by cinematographer Anthony Dod Mantle (“127 Hours”), is remarkable and unique, lending the action a grisly but poetic feel; whether the Slo-Mo drug was the chicken or egg in the duo’s development of their visual style, it creates a sort of foundation for the speed and texture of the rest of the film, and looks absolutely stunning every time it’s used. Simultaneously, Travis and Mantle are liberal but judicious about the violence, never turning away from an opportunity to show Dredd or Anderson blow a hole in a perp, but also not quite doing it in a way that crosses a line from bleakly funny to just plain bleak.

As Dredd, Urban either has a better character to play than Stallone did, or simply has a better grasp on what makes him tick, but the actor continues to distinguish himself as a versatile performer who turns mimicry into emotional meaning. Following his turn as Bones in J.J. A