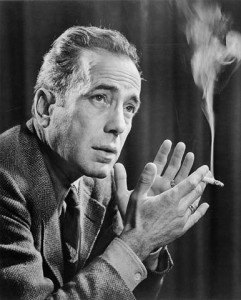 Should R ratings be slapped on any movie that tells the story of a character who happens to smoke? The Atlantic has an interesting article up that cites a recent study from the Surgeon General that deems smoking to be an R-rated behavior similar to excessive sex, violence and foul language, adding that keeping it out of non-R rated movies would curb smoking among adolescents by up to 18%.

Hey, if the big bad F word is legal for all to use, but still cause enough to say people under the age of 17 can’t watch a flick, then why not smoking? After all, it actually is illegal to buy tobacco under the age of 18.

Enlisting just over 6,500 adolescents, the researchers followed up with longitudinal surveys, checking in with the participants at eight month intervals, and using a survival model to estimate the length of time before an onset of smoking.

Movie smoking exposure (or MSE) was evaluated based upon the viewing of 532 recent box office hits. Each movie was categorized according to the respective ratings assigned by the Motion Picture Association of America: G/PG, PG-13, and R.

They found that it was the act of smoking itself that prompted adolescents to pick up the habit and not other characteristics of an R-rated flick.

To force smoking into the R-rated corner seems to punish the wrong people. Filmmakers typically want either A) to offer a reflective portrayal of reality through their films (where smoking exists, even among young people) or B) to make an artistic statement or creative commentary in which a character, no matter how fanciful, may happen to smoke. I’m not sure what the caterpillar in Alice in Wonderland puffed on, but I’m sure it was something we’ve deemed illegal for all people – not just 12-year-olds.

The point is, we view cigarettes as cancer giving murder sticks, but rather than sending the Marlboro Man to ride the lightning, we put the screws to the film industry. Yes, the logic applicable to withholding excessive sex, violence and profanity from young viewers extends to smoking as well, but my intent is not to advocate the abolition of the ratings system. My intent is only to point out that blaming movies for teenage smoking, in a small way, wipes clean the hands of the enemy.

It’s a good thing Bogart worked when he did.