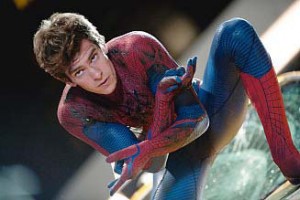 One of the best moments in “The Amazing Spider-Man” is when Stan Lee, a co-creator of the superhero, makes his obligatory cameo.

Lee is in a library with a pair of headphones on and the audience hears classical music. Behind him, a lizard beast and Spider-Man engage in an epic battle. It’s a wonderful scene, especially when Lee nearly gets hit by a table.

Some have argued that there was no need for a new version of Spider-Man so soon after the trio of movies that featured Tobey Maguire as the web-slinger. Maguire’s “Spider-Man 3” was released in 2007.

But that scene with Lee and numerous other moments argue otherwise. This is a good movie that takes itself seriously but not too seriously.

Peter Parker (Andrew Garfield) lost his parents as a child, and he’s grown up with his Uncle Ben (Martin Sheen) and Aunt May (Sally Field). They’ve given him a strong moral center, but he’s a lonely teenager trying to answer the big question: Who am I?

This is a brooding movie at times. A beloved family member dies, and Peter loses his way, as he tries to figure out exactly what he owes the rest of the world.

Then there are scenes like the one with Lee, where the mood lightens considerably and both Spider-Man and the audience get to have fun.

Director Marc Webb treads a thin web here, and he succeeds for the most part, though we do get caught up in a little too much teenage angst.

The reboot lacks some of the novelty factor of Maguire’s early turn as Spider-Man, but strong performances from all of the main characters mean “The Amazing Spider-Man” can crawl on its own hands and feet.

I give “The Amazing Spider-Man” a B plus.

It’s showing at Malcos in Tupelo, Oxford, Corinth and Columbus, as well as Hollywood Premier Cinemas in Starkville and Movie Reel 4 in New Albany.

Kelli Karlson Wizard 106.7 She gives “The Amazing Spider-Man” an A minus.

“I had a blast and will see it again.”

“There are some really cool visuals in this movie, and it was a fun ride.”

Look for movie reviews in Scene on Thursdays, and listen each Tuesday morning on Wizard 106.7 between 8:30 and 8:45 a.m.