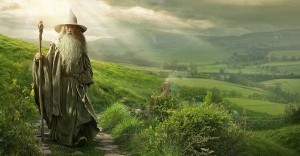 Comic-Con 2012 has certainly been a big one for many film franchises, from “Twilight Saga: Breaking Dawn Part 2” to the upcoming “Hobbit” movie.

In recent “The Hobbit” film news, breaking details from director Peter Jackson at Comic-Con this week may be having some “Lord of the Rings” fans very excited. According to confirmed reports from “Screen Rant” this Sunday, the director revealed he may extend “The Hobbit” from two movies into another trilogy, with the third part based off author JRR Tolkien’s unpublished writings.

After the successful “Hobbit” panel at Comic-Con 2012 in San Diego this week, Peter Jackson still had some more secrets to tell of everyone’s favorite hairy-footed friends.

“Screen Rant” first reveals this Saturday that Jackson did confirm there were several book scenes he was not able to adapt into the movie because of time and space issues.

With the main filming of “The Hobbit: An Unexpected Journey” finished—the second prequel installment is titled “The Hobbit: There and Back again”—the director may now make a third film from JRR Tolkien’s unpublished books.

According to “HitFix,” who first received word on a possible trilogy for “The Hobbit” films, this is Jackson’s official statement:

“We’ve been certainly talking to the studio about material we cannot shoot … I’d like to shoot a bunch more material. There’s so much good stuff in the appendices that we haven’t been able to squeeze into these movies. That’s a discussion we’re currently having.”

At Comic-Con 2012, “Lord of the Rings” director Peter Jackson was able to spill a couple more secrets to his Middle-earth fans:

“It’s still premature. We have an incredible source of material, and we do have the rights to many of JRR Tolkien’s notes, and I have been talking to the stuido about other things we haven’t seen that might make into a [third] film.”

What “Lord of the Rings” fans wouldn’t want to see a little more backstory on everyone’s favorite hobbit Bilbo Baggins, the band of dwarves, or the great wizard, Gandalf the Grey (as seen on the awesome new movie poster)?

At the same time, there is the question as to whether even having “The Hobbit” film split into two movies—before considering a third—might stretch the work too thin. However, with the talented cast and Jackson at the reign of this “Lord of the Rings” trilogy series, fans likely have little to worry about.

“The Hobbit: An Unexpected Journey” is expected to hit U.S. theaters with its journeying adventure this December 14th, 2012.