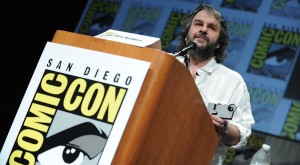 Peter Jackson arrived at the Comic-Con fan convention here on Saturday and wowed the crowd with 13 minutes of highly anticipated footage from the first of his two ultraexpensive “Hobbit” movies.

But he also played it safe — very safe — by not so much as mentioning, much less demonstrating, the filmmaking wizardry at the heart of the project. That left big questions about the movie industry’s future unanswered and added to a theme of this year’s Comic-Con: Hollywood has come to fear this place.

Mr. Jackson is shooting his two “Hobbit” movies, the first of which is to arrive in theaters in December, at an unusually fast 48 frames a second, twice the standard rate. The result can startle — colors appear brighter, images sharper and motion smoother — and Mr. Jackson, the Oscar-winning director of the “Lord of the Rings” trilogy, thinks the technique can transform moviegoing.

“We have to provide a cinematic experience that brings people back to theaters,” he told reporters.

But an estimated 6,500 fans did not have that experience when they gathered in Comic-Con’s cavernous Hall H moments earlier to see the new footage. A large number of them had camped through the night. (Ian McKellen, who portrayed the wizard Gandalf, was struck by the fans’ youth. “It is astonishing that most people at the presentation just now have never seen ‘The Lord of the Rings’ in theaters,” he observed at a news conference.)

With devotion like that, one might think that Comic-Con would be a relatively low-risk place for Mr. Jackson and his studio backers, led by Warner Brothers, to take 48-frame-projection for a test drive. This is a crowd that has been starved for a successor to “Avatar,” a movie that was supposed to herald a transformed moviegoing experience that has so far not arrived.

Still, Mr. Jackson, one of Hollywood’s boldest directors, made the unexpectedly timid decision to present “The Hobbit: An Unexpected Journey” in a standard format here — it was not even in 3-D — because he feared an online outcry that could hurt box-office results.

It is no small worry. “Unexpected Journey” and “The Hobbit: There and Back Again,” due next year, together carry an estimated $800 million in production and global marketing costs.

“I didn’t want to repeat the Cinema-Con experience,” Mr. Jackson explained. At that convention, held in April for movie theater owners, his high-speed presentation of “Unexpected Journey” footage received a sharply mixed reaction. “Hall H is not the place” where he wanted fans to experience it, he said.

Mr. Jackson was far from the only one holding back in San Diego this year. Three of Hollywood’s six major movie studios — Paramount, Universal and 20th Century Fox — decided not to come at all rather than risk showing footage for distant movies with still-unfinished special effects.

On Saturday, the director Zack Snyder, there to promote his new Superman movie, “Man of Steel,” set for release next June, showed a trailer with no overt villain. When fans asked about the bad guy, Mr. Snyder hemmed, hawed and decided to treat that bit of news like a state secret: everyone in the movie will be “relatable,” he offered.

“Trust me” seemed to be Mr. Snyder’s message; he described his movie and its components as “awesome” 10 or 12 times. But the brief atmospheric footage that he presented was not so much awesome as adequate. The clips hinted at the sort of moody, gritty superhero revisionism that has been standard since Christopher Nolan, a producer of “Man of Steel,” directed “Batman Begins” in 2005.

Entertainment companies come to Comic-Con with the goal of igniting controlled brush fires on the Web — a burst of positive Twitter, blog and Facebook chatter that spreads to the mainstream and creates new fans. But the Comic-Con crowd is a discerning one and frequently refuses to cooperate. This can create difficult (sometimes impossible) messes for studio marketers to mop up.

This year, there were examples of each. Disney earned a positive reaction to an intense train sequence from its coming “Lone Ranger” remake, squelching concerns (for now) about the global appeal of a Western.

In the opposite direction, “The Host,” a new movie project from Stephenie Meyer, the author of the “Twilight” books, was greeted with puzzled expressions and tepid applause. That sent a publicist for its distributor, Open Road Films, scrambling to point a reporter toward positive reactions from bloggers.

Despite showcasing “The Hobbit” in a conventional way, Warner Brothers put considerable effort into the convention. The studio and one of its major suppliers, Legendary Pictures, dressed up a two-and-a-half-hour presentation with a collection of huge, wraparound screens that flashed logos and moving imagery behind and around the stage.

But the net effect was to seemingly shrink the separate screens on which the movies actually appeared. Superman was not nearly as super as the big Legendary logo that flashed behind Thomas Tull, that company’s chief executive, as he took the unusual step of introducing his company’s movies, rather than sitting back in the reserved seats and applauding the talent.

The Warner presentation, described onstage as the convention’s “juggernaut” panel, was impressive. It tumbled through snippets of a giant monsters-and-robots movie, “Pacific Rim,” from Guillermo del Toro; dropped a bombshell by introducing plans for a new “Godzilla”; and had a surprise appearance by Will Ferrell and Zach Galifianakis to promote “The Campaign.” (Mr. Ferrell showed up in a Will Ferrell mask.)

Still, Mr. del Toro’s clips, though shaking and shuddering with 25-story-tall robots, barely showed tooth or claw of the apocalyptic monsters the robots were supposed to be fighting. Asked about the creatures, he said they would be the best of the best, nine or so horrible beasts selected from what he said was an “American Idol”-like audition line of about 40 created for the film.

“Everything will be there,” he assured the fans.

It was as if the movies had become a little too big for Comic-Con and its screens. But trust us, said the filmmakers.

They’re going to be “awesome.”