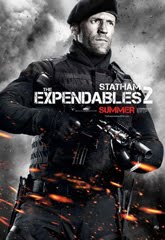 Tom Jolliffe mans up in preparation for The Expendables 2, taking in an overdose of explosive action cinema with ‘The Jason Statham Rampage’…

The Stath broke onto the big screen scene following a Guy Ritchie double smash of Lock, Stock and Two Smoking Barrels then Snatch. The former Olympic diver, swimwear model and wheeler dealer had on screen charisma to burn. His transformation from screen cockney dodgy dealer to genuine action hero came when he donned the smart clobber of Frank Martin for The Transporter. Since then he’s produced a steady stream of action carnage to make him one of the few new contenders worthy of comparison with action gods of the 80s like Sylvester Stallone and Arnold Schwarzenegger. Statham is like an English cross-breed of Bruce Willis and Jean Claude Van Damme. A gift for on screen fighting, as well as throwing himself into as much of his own stunt work as he can possibly get away with, has given Statham a firm appeal with genre fans.

Here is the Jason Statham Rampage:

This remake of the Charles Bronson assassin flick sees Statham in front of director Simon West’s lens. West of course has since gone on to direct Statham and a host of fellow action icons in The Expendables 2. What the Stath and West deliver here is a workmanlike but very well made action thriller. There’s decent action with some inventive set pieces and it’s something both star and director can deliver well.

Co-starring with Statham is one of the most reliable character actors doing the rounds right now, Mr Ben Foster. Foster has an edge and intensity when player darker roles. Here he’s great, just as he was in films like Hostage and particularly 3:10 to Yuma. Statham too is as reliable as ever and there’s a good energy between him and Foster.

Plenty of choices given the nature of it being about the best assassin in the business, however choice kill goes to Ben Foster who has a thoroughly brutal fight with an opponent twice his size before finally killing him.

Chev Chelios is back in this visceral, unrelenting assault on the senses (or is that sense?). If you thought the first film was dementedly puerile and dizzyingly hyperactive, then you haven’t seen anything yet. Crank 2 is completely insane!

The film starts off at 100mph and barely lets up as it rockets from set piece, to set piece. It’s all pretty terrible if you’re looking at it in filmic terms. It’s rough, shoddy and plot-less and crudity overtakes wit with ease, but daggnabbit the film is guiltily entertaining!

Statham is brilliant in this. He kicks ass with his usual aplomb while throwing himself into a large array of fights and stunt work. The Stath is also hilarious in a performance with plenty of comedic flourish. Clearly he, and everyone else involved, is having a great time injecting the film with so much energy and freedom to just do what the hell they want. There’s a host of cameos too including David Carradine, the late Corey Haim and mad as a box of frogs Bai Ling. Bai Ling is playing herself pretty much. She seems nuts in real life too, but you know what, spending a day with Ling might well be the most entertaining circus attraction going.

There’s a lot of action for the Grim Reaper in this one, but Statham kills the main bad guy by beating him to death… whilst on fire.

Statham stars in this remake of the old Grindhouse 70s flick with David Carradine and Sly Stallone. Basic plotline aside this is an expensive and decidedly more modern and polished version by director Paul W. S. Anderson (if you can call one of his films polished that is). Not exactly brimming with intelligence of ingenuity, this still manages to be an entertaining slice of B-movie fun.

The cast are very good, helping to elevate the film. Statham is reliable and effectively stoic in the lead. It’s hardly a stretch for him but much like the other top action stars, he’s suitably convincing in his tough guy role. Ian McShane chews scenery like a ravenous bear going at an unattended picnic spread. Joan Allen makes for a good hiss worthy villain.

When it gets down to the small matter of death racing, the film showcases its real selling point. There’s plenty of great car work and to Anderson’s credit, he keeps as much in camera as possible, where-as all too many modern action flicks resort to CGI theatrics. This is at least, despite the subtlety free direction, old school in its approach.

A rival racer crashes out and then decides to get out his car to shout to the watching world about being indestructible and unkillable. He promptly gets killed. Muppet.

The Stath finds himself in this forgettable twisty turny crime thriller as a disgraced cop, partnered with a young, smartass and uptight Ryan Phillippe. Two words to combine to make me think of cinematic torture are Ryan and Phillippe. Thankfully here he’s just about bearable. Also starring as mysterious bank robber Lorenz is Wesley Snipes. At this point Snipes was firmly solidified as a straight to video merchant, often looking decidedly bored with the low budget guff he was headlining. Wesley though is inspired enough to put a little more effort and energy into his role here.

Chaos is a low brow cousin of Spike Lee’s Inside Man. It lacks the script and intelligence of that film, and also lacks enough action to make this a memorable entry in either of Statham or Snipes’ explosive resumes. It’s silly and not particularly well written, though there’s a sense they’re going for something that’s supposed to challenge the audience and weave an elaborate and engrossing tale, like The Usual Suspects or something. It does not though. It’s hackneyed and contrived. That said, Statham is okay. He’s not at his best and never really gets enough physical action, but he’s reliable, and the presence of him and Snipes makes this watchable.

An idiot bank security guard decides to press an alarm button, without much subtlety at all, whilst a bank robber is stood right next to him and without any difficulty, spots him doing so. The guy gets shot, before Wesley strolls up and gives him another bullet sandwich for his din-dins. That one finishes him off.

This popular franchise offered up plenty of high kicking entertainment with Statham starring as driver for hire Frank Martin. The films could almost be car ads, or suit ads, but they actually deliver some great ass-kickings, all choreographed by Hong Kong action legend Corey Yuen.

The third in the franchise is ultimately the weakest. There’s enough here that should have meant it was much better though, which is the real shame. There’s plenty of imaginative action and bad guy Robert Knepper is the pick of the villains from the trilogy.

The major problems here are largely in the direction and the editing. For some reason the style of the film is just jarring. It’s an incoherent, nauseating blur of poorly constructed shots and cuts. There are far too many avid farts going on here, and the action sequences often suffer with the disorientating speed and timing of cuts, whilst shots all too often don’t gel with each other. It really is diabolical some of the editing choice. How much is purely down to the editing team and how much is due to Olivier Megaton’s flat direction is debatable, but the film suffers from both. A Benny Hill-esque car chase probably tops the bunch of butchered action, where said chase has been poorly shot and then sped up in the editing room. It’s ridiculous.

Elsewhere, producer Luc Besson in his infinite wisdom decided to cast the leading lady (Natalya Rudakova) having seen her walking in the street. The problem is, she’s not an actress and it shows. She’s not aided by a poor script and though she has a certain indefinable charm, her lack of experience and natural ability is telling. A beefier than normal Statham is typically solid in a role that fits him like an old pair of slippers now. He’s great in action, at least when the editing allows the audience to see what he’s doing.

Knepper gets a big crescendo in the music and a drawn out and defeated close-up just before he’s blown to a million pieces by the bomb that had spent most of the movie strapped to Statham’s arm.