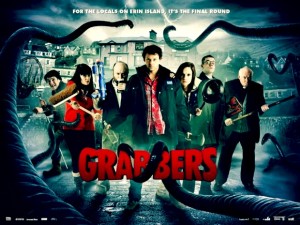 An Irish horror-comedy in which the protagonists must get drunk in order to survive attacks from bloodsucking monsters? What’s not to love?

Directed by Jon Wright and shot in Donegal, the film features a uniquely Irish way of fending off blood-sucking creatures – having an incredible amount of alcohol in your blood system. Here’s the official studio synopsis:

“Grabbers tells the story of Ciarán O’Shea (Richard Coyle), a charming but heavy-drinking local Garda who is tasked with greeting Lisa Nolan (Ruth Bradley), a straight-laced young officer who has just arrived to a small fishing village off the West coast of Ireland.

“Not that there’s much for them to do, aside from dealing with the occasional drunk, and that’s usually O’Shea himself. But strange doings are afoot: the crew of a fishing boat disappears, whales start appearing dead on the shore, a local lobsterman catches a strange tentacled creature in his trap.

“Soon it becomes clear to Garda O’Shea and Nolan that there’s something big out there, and that it’s hungry. It’s time to rally the villagers, arm the troops…and head to the pub!”

It’s a film that has already been dubbed the Irish answer to Tremors in some circles and praise for B-movie sillyness doesn’t come much higher than that. Grabbers hits irish cinemas on August 10 and for now you can enjoy the trailer above.