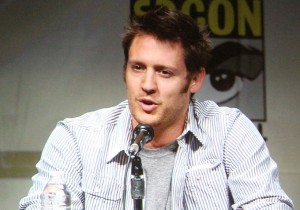 Yesterday, Neill Blomkamp hit Hall H at Comic-Con with seven minutes of footage from his sophomore feature film effort, “Elysium.” The “District 9” director was returning to San Diego as a bit of a hero, having unveiled his first feature at the convention to a rapturous reception and subsequent critical and box office success. But as fans know, Blomkamp nearly made his debut with the Peter Jackson-produced “Halo,” an experience he has not minced words about, describing it earlier this year as “a clusterfuck from day one.” But, sitting down to chat with our own Jeff Otto, he reveals: “I think ‘Halo’ was a complete blessing in disguise. I have no idea what would’ve happened to my career if I had done that.”
“It really, really, really, really, really happened in a way that I think is pretty lucky for me. I’m lucky that I met Peter Jackson and I’m incredibly lucky that he was the person that allowed ‘District 9’ to be made. There is absolutely no way on God’s Earth that that film would be made in Hollywood without his involvement. Or without him basically dictating that it was going to be me. A first time director, you just can’t do that,” Blomkamp explained. “What happened for me was, the collapse of the hornet’s nest nightmare that ‘Halo’ would’ve been — and I got to experience that as well, I worked on that thing for six months — it’s like ‘good riddance’ when it falls over. And then to be more confident in your own ideas, and to work on [‘District 9’] and then to work on another idea at the time, it’s now reaffirmed for me, you don’t need to go and do this whole approach that a lot of directors seem to take. I don’t really care if it’s not the biggest film. As long as I’m creatively invested in it, I feel like I’m making the right choice. It could be a $5 million film, it doesn’t matter. The budget we needed on [‘Elysium’] was a lot, but that’s because the concept required that.”

Starring a terrific ensemble, including Matt Damon, Jodie Foster, Sharlto Copley, William Fichtner, Alice Braga, Diego Luna and Wagner Moura, the film is set in 2159 and centers on a man who takes on a daunting mission in a world where the very wealthy live on the pristine, man-made space station called Elysium, and fight to keep the poor and struggling citizens of Earth from illegally immigrating. At a quick glance, it’s easy to see many political subtexts to the premise, but as Blomkamp notes, he started writing the film before the headlines made by Occupy Wall Street and he says any real world parallels are not a conscious part of his process.

“I’m very visual. And I feel like it’s a combination in being interested in topics on Earth, mixed with imagery and science fiction concepts…all of those things seem to merge in a way that you realize may be a framework for a film, that I feel like I want to make,” he said. “It’s incredibly difficult to narrow down. It’s a very sort of mercurial, vapourous kind of creative space, where it’s like one day I’m like, ‘I actually the idea of this space station imagery I’ve been thinking of. And this group of people living on it that are billionaires, and this group of people on Earth that are destitute.’ It’s just interesting imagery. And from that, the socio-political stuff, makes the framework, and then it’s, ‘Okay, I’m going to write a script.’ ”

“I’m just interested in an idea, the byproduct is something that appears to be socially relevant. And I think it’s because I’m just interested in society in general, I’m interested in Earth and where humans are going and where we come from. So I have zero goal to go out and try and make a film about important topics, it just seems to work its way into what I like to make,” he continued adding, “A line cannot be drawn between the creative part of the mind, and the part of the mind that is absorbing these real life things. They mesh, and you just get something starting to generate…but definitely the idea of inequality, of the haves and haves not, has been around for millennia, so those topics just interest me.”