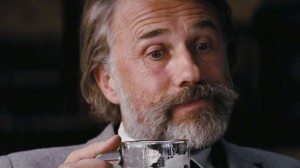 One poor journalist gets things started by asking Christoph Waltz if he can talk about his character.

Christoph Waltz: No. Definitely no. You know, I don’t talk about the characters that I play. Years ago, I was a little timid about it and I kind of squirmed when I was asked, “Could you tell us something about your character.” Now with a little self-confidence that comes with the grey beard, I just flatly refuse. I find it incredibly counterproductive to what I do – not to what you do, that I completely understand – to explain, because I want you to see what it is that you see. I strongly believe that what I do for a living is for you to see and to watch. But when I’m an audience too, when we go to the movies or to the theater, we don’t go because we want that version, but because we want to recognize what we have to do with that version. So meaning if you really want to distill it down to the bare essence, I claim that when we go to the movies we go to see ourselves. Now, if I sort of push in and say, “No, no, you cannot see what you see. You have to see what I tell you.” Why would I do it? I can spare myself the bother of doing it, of going to New Orleans for weeks in the summer and sweat and work and fall of horses and stuff like that. We could just meet and I tell you, which would be a nice digital age performance, but either or. So I just flatly refuse to explain my characters.

We dare to ask how he came up with the long hair and beard look.

I can tell you very quickly. It grew.

Quentin and I sort of formed a friendship and an understanding on that basis and a common artistic interest. So I’m interested in what he writes. I’m interested in what Richard Ford writes. I’m interested in what Jonathan Franzen writes. When a new book comes out or becomes accessible in whatever form, I get it and I read it. Same thing with Quentin. Lucky for me, we have a friendship so we meet occasionally and he tells me what he’s thinking about. Other little things that he writes, I read. He started writing some theoretical stuff about movies and spaghetti westerns and historical [issues], so I do what a friend would do, follow his friend’s thoughts. In this case, I wasn’t involved at all but I was invited to observe the creation of this thing. So I did because it was fantastically interesting to actually see the thing evolve and change and develop from an idea into a full blown fleshed out character and story, because that’s really what the whole thing is, is a story.

Someone asked Christoph Waltz about working with Jamie Foxx and Kerry Washington.

Why the two of them? Why not two others?

The reporter saves the follow-up by saying she likes Jamie and Kerry. (We also would have taken, “Because they are also here at Comic Con.”)

Okay. Kerry unfortunately didn’t have as much as I wanted her to have with me, scenes. But we had this one scene that I was a little bit afraid of because of the German, when we speak German and even though Kerry’s German really miraculously came together very quickly, I felt I don’t know, it’s not enough, there should be some form of understanding. But I made it a habit not to go to Quentin and say, “It’s not enough.” I made it a habit to say, “Well, maybe my thoughts are not enough.” Usually that’s why it’s called an actor. You work it out through action and not so much at home through thinking. So when we finally got to shooting the scene and rehearsing it, that’s really Quentin’s genius. When you do it, all of a sudden it starts to bloom. These little Chinese magic gardens that are just a few paper strips that you put together and you sprinkle water on it and then all of a sudden magically they turn into this wonderful little [flowers.] That’s what I’m referring to in that scene.

With Jamie, with Jamie it was different because we met very early on, in probably June last year, months before we started to shoot. And so we could meet again and just get acquainted because that was a special relationship that we had to portray there in the story, which doesn’t mean that you have to have that, the analog relationship in reality, but it helps and why not? He’s such a great guy that it was instructive inasmuch as I know nothing about this whole black/white thing because I couldn’t care less. But that’s because I grew up in a culture where you can afford not to care less. Now being here in America where it really is an issue, I was a little flabbergasted that it is an issue because for me it isn’t. Jamie could kind of introduce me to, first of all, that thing at all and second, you know, to a specific perspective that I on my own wouldn’t have had.

I have no idea. Really just because I can’t gauge the extent in this society. I can guess at it but I have no concrete way of really, really judging the extent. So in a way, I decided consciously to stay with an admittedly comfortable position to say I don’t know because I don’t care. And I don’t care not in an unsympathetic and detached way. For me it is within my scope of thinking, it doesn’t exist as an issue and I like it that way.

Christoph Waltz is asked what westerns mean to him.

Again, different from what it’d be in this country because the spaghetti western is closer to me than the real western, geographically speaking. Because of course, look, we all knew, I grew up in the European west on the west side of the Iron Curtain. Even though the Iron Curtain was very close to where I grew up, it was still the west side so we were exposed to all of the Marshall Plan and post Marshall Plan contents. So I was never a great western fan. In a way I preferred the spaghetti western to the original. Maybe, but that’s a speculation, because a certain distance and that it kind of in a way ties into what I mean by the race question. Maybe a certain distance to the actual core of the thing is a good way to get a perspective and get a different, I hesitate to say objective because it isn’t, and that kind of brings us around to the beginning. Objective is impossible. We do it to your subjective.