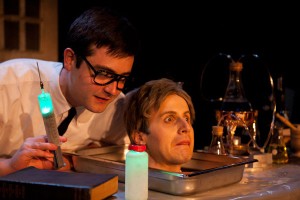 This week, New York City’s musical theater scene is revitalized, thanks to Stuart Gordon and the musical adaptation of his gonzo, gory contemporary classic, RE-ANIMATOR (playing at the PTC Performance Space- 555 West 42 St), finally hitting town, following an extended, acclaimed run in Los Angeles. FANGORIA spoke with the veteran director on transitioning from screen to stage, his early roots in Chicago theater, his next cannibalistic stage endeavor and putting the audience to work.

FANGORIA: How hard is it to bring an established show a) on the road and b) to New York? It took awhile to get both NEVERMORE and RE-ANIMATOR here.

STUART GORDON: I know, it’s progress. But, all roads lead to New York with theater, and it’s always been a goal to bring both shows there with extended runs, ideally. So, we gave New Yorkers a taste of NEVERMORE last Halloween and with the New York Musical Theatre Festival, we’ll be there for a week and hopefully, someone will fall in love with the show and say, “here’s a half of a million dollars, let’s bring it to Off-Broadway.”

FANG: NEVERMORE and RE-ANIMATOR are such opposite ends of the theatrical spectrum-

GORDON: They are! It’s just great to be doing theater. My roots are in theater. I was the artistic director of the Organic Theater Company for fifteen years, before I directed my first feature. I love theater, it’s great to be doing it, and doing RE-ANIMATOR on stage is like coming full circle.

FANG: Was there a period where you were making a concerted effort to get back into theater, or have you always wanted to and now, the timing has aligned?

GORDON: I’ve always kind of kept a hand in theater and I’ve done a few shows out here. I don’t get to do it as often as I would like. I actually even directed a circus, which was fun. It’s one of those things [where] you’ve got to kind of stay in the game. Besides, it’s something I love doing so it’s hard for me to stay away.

FANG: And is that what happens, you get back and snowball into even more, as TASTE has just been announced?

GORDON: It is kind of like riding a bike, you never forget how to do it. I’m excited. NEVERMORE was a one-man show, so it had its challenges in that regard—keeping an audience engaged for 90 minutes with only one character on stage. RE-ANIMATOR is completely the opposite. It’s a comedy; it’s got a cast of eleven people and tons of special FX and so forth. It’s a very elaborate show. NEVERMORE is very simple and I think there’s something beautiful about the simplicity of it all.

FANG: What was it like wrangling and building the elaborate FX of RE-ANIMATOR, working on stage and working in that moment?

GORDON: One of the things that convinced me to do the show as a musical was the fact that back when we did the movie, all of the FX were practical. They all were things that could be done on stage and when I realized that, I rounded up the old gang that did the movie—Tony Doublin and John Naulin and John Buechler—and said, “Let’s figure out how we can do this every night, and live on stage.” They really outdid themselves. I’m amazed at some of the stuff they were able to pull off.

FANG: Have you seen an evolution of these FX, at all, from when you were focusing on theater?

GORDON: Way back in the day, we did some blood FX, but nothing compared to what we’re doing in RE-ANIMATOR. Part of it, really, I think is using movie FX live on stage. It’s seldom done, in theater. The audience is just completely freaked out. It’s better than 3D. They’re actually getting splattered with gore, if they’re sitting in the first couple of rows. It’s called the Splash Zone, and it’s the most popular seats in the house. People come wearing white, so they can end up wearing red at the end of the evening.

FANG: Horror and musicals, much like horror and comedy, are really kind of kindred spirits. They run in these really heightened emotional states. How easy, or difficult, was it to adapt the film?

GORDON: It is, there’s a subgenre of horror/musical. Right back to SWEENEY TODD and THE PHANTOM OF THE OPERA; EVIL DEAD has been a musical, and THE TOXIC AVENGER. LITTLE SHOP OF HORRORS. Everything is heightened, it’s almost operatic. RE-ANIMATOR is almost wall-to-wall music, and it would probably be more accurate to be RE-ANIMATOR: The Operetta. There’s only about ten minutes of spoken word in the whole thing. Mark Nutter, the composer, just was amazing in that he was able to take entire scenes and put them to music. We’ve got some wonderful singers in the show.

GORDON: It is, it’s larger than life and lends itself to musicals, especially.

FANG: Were you writing any of the music for the show, as well?

GORDON: I didn’t write any of the music. I have to give Mark the credit for that, but I worked with him and I had some ideas about where some songs could go. I envisioned about fifteen songs in the whole thing, and it turns out now there’s about 40, or so. It’s really wonderful, and he just kept the spirit of the movie. And some people feel you get a little more emotional than the movie, because music allows you to express the characters’ inner feelings.

FANG: With RE-ANIMATOR, and TASTE, and even EDMOND, which you adapted from a stage show, what do you enjoy about these transitions and telling a story across mediums?

GORDON: Theater, I think, is in some ways the most powerful art form, because the audience really takes part in creating it. That’s one of the things I like about both NEVERMORE and RE-ANIMATOR. We don’t pretend the audience isn’t there. The audience is part of the action. I think, as an audience member, it really makes you feel like you’re living through something, rather than just sitting and watching it. But, even the movies I do, I always try to get the audience to participate, I always try to get the audience’s imagination engaged, rather than showing them everything.

I think that’s some of the problem with the newer movies, with all of these CG effects, is that they don’t let the audience’s imagination have anything. They don’t put the audience to work, which is what I like to do.

FANG: Do you think there’s a visceral takeaway audiences are getting from horror/musicals and horror stage shows vs. the overwhelming CG they’re seeing in studio pictures?

GORDON: Yea, I think so. I think CG is a very passive experience. You sit there and it sort of washes over you and you don’t really get involved. It doesn’t affect you strongly.

FANG: There’s often no weight to it.

GORDON: There isn’t, and it’s funny because it’s not even horrifying. There’s something about it, where you know it’s not real. Whereas even practical FX, I think are a hundred times more powerful onscreen, and having the actors involved and being able to experience it.

FANG: I was watching the trailer for the musical and got so curious how many pencils the production goes through?

GORDON: [Laughs] I think it’s about a dozen every show.

FANG: Before speaking with you, I was revisiting RE-ANIMATOR and was struck by how fresh it still feels because of your use of handheld and immediacy.

GORDON: It’s amazing to me people are still watching the film and enjoying it. The film is 27 years-old now. And still, seeing it with an audience, it is very immediate and the audience participates. It’s way more fun than just sitting and watching it at home on a TV screen.

FANG: How did you approach what the musical needed, narratively, vs the film?

FANG: Did the musical afford you any opportunities to tweak things or heighten certain aspects of the story you wanted to shine more light on?

GORDON: Yea, it does. I think the relationships are stronger in the musical than they are in the movie. I don’t want to put down the movie, or the actors—the actors are wonderful—but having the songs there, the relationship between Megan and her father is much more touching and stronger in the musical than it is in the movie. And her relationship with Dan Cain, you’re able to have those moments where they can have a love song. It’s funny, now when I watch the movie, I keep waiting for them to sing.

FANG: So, now how different from NEVERMORE and RE-ANIMATOR, can we expect TASTE to be?

GORDON: Well, TASTE is going to be very different in that it’s going to be a lot more realistic, I think. It’s funny; the play kind of reminds me of STRANGERS ON A TRAIN. It’s a two-character piece, and these people are strangers who’ve been brought together by these weird circumstances, and you see it acted out before you. I think it can be extremely disturbing, and I think the fact that it’s happening live in front of you—my wife and I were kidding about the fact that it’s a cooking show. You’ll be able to smell things and so forth, so I think it’ll be much more powerful than a movie.

FANG: How familiar were you with the case beforehand?

GORDON: When it happened, I was amazed by it. I remember always thinking it’d be a great subject to deal with because it is so beyond the pale. The things that happen in life are always more disturbing than anything you can dream up.

FANG: With RE-ANIMATOR, you’ve obviously launched the musical so many years after the film. Are you worried about fatigue with jumping into the TASTE film, following the production’s run?

GORDON: No, actually my feeling is that it shouldn’t go into the film. I’d like to let it have a nice, long theatrical run before a movie is made of it. I think some of the press made it sound like we were going to be doing the movie like ten minutes after we did the play, which is not the case.

RE-ANIMATOR: THE MUSICAL runs as part of the New York Musical Theatre Festival at the PTC Performance Space until this Sunday, July 22. You can get tickets here.