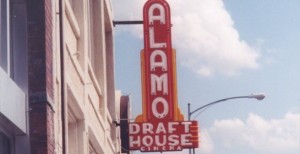 “Silent House”, the recent horror film presented as a single-take, is certainly one of the best horror films of the year. It was creative, frightening, unnerving, and boasted an excellent performance in Elizabeth Olsen.

Unfortunately many were unable to appreciate this when it opened in OKC’s Cinemark Tinseltown theater. The guests were incredibly rowdy, even for a Friday night, and the talking and texting threatened to drown out the film.

Some folks complained. But not much changed.

After the film, many angered film fans were given an apology and a rain-check from the theater. But the invested time and experience of a wonderfully inventive horror film (a true rarity these days) had already been completely wasted on so many. For many of those people, it was their one movie night of the month, and it was ruined because the theater refused to grow a pair and enforce the “Don’t text in our theater or we will kick you out” ads that always run in front of their films.

Like an angel from heaven comes The Alamo Drafthouse, a years-old staple in some states, yet many still haven’t heard of these wonderful cinema houses.

Their founder, Tim League, set out to make a theater for and by movie lovers, a place where the concept of “film as art” could exist without any of the usual snobbery. The movie houses have tables where guests can eat fine food and drink beers from local breweries while enjoying the film in front of them. One thing you won’t ever find in Tim League’s establishments, however, are talkers or texters (in the theater anyways).

It has been something he has become famous for, actually, because his employees have zero tolerance for that rude and selfish behavior, and will kick an offender out, no questions asked. Yeah buddy! They’re so proud of themselves that they screen their own “anti-texting” ads before their films, ads that simply replay the angry calls of guests they have kicked out (see video). It’s their wonderful way of saying: “We don’t care. You text or talk, you’re out.”

The Alamo Drafthouses are truly an amazing thing in this day and age, where people kill themselves on the highway over a tweet that was going to read, “I love this song on the radio”.

Can’t we just sit back, relax, and put our phones away? Like, literally turn them off? It worked for years before cell phones, it can still work. No one will die because you don’t answer your phone, and if they do you shouldn’t have been in a movie theater. Lose yourself in the movie, that’s what it’s all about, after all!

Tim League has written a scathing blog about the state our culture is in regarding texting and talking during movies, and Firstshowing’s Ben Pearson wrote a story about his blog, further expounding on the alarming trend. Both are must-reads.

Maybe it seems harmless, but consider the amount of time artists put into making these movies. How selfish it is to ignore their work to text your buddy that you “can’t make the party tonight”, and pull so many others out of the film experience with the light your phone emits.

Which brings me back to horror cinema, a genre that can be a real hoot at the theatres, with a good audience, but one that can be ruined by texting, talking, and laughing. More and more the horror movie experience is lessened by movie-goers who spend the majority of their time on their phone and then claim that the film “wasn’t scary”. If you don’t want to be scared, don’t go see a horror film. Don’t laugh your way through it, either, just to make it better, for it lessens the thrill of being scared for the rest of us. This seems like common sense, but alas, the world is full of people still in need of a good dose of humble-pie.

I see my films at The Warren Theatres, in Moore, OK, where Bill Warren has created a similar love for the purity of the art form. But even there I haven’t seen anyone kicked out for texting or talking.

It only takes a few instances of a theater taking a stand for it to gain a reputation as a theater that doesn’t tolerate rude behavior. But that first step must be taken.

The true, loyal film lovers will appreciate this gesture, and fill the seats of such auditoriums. And the theatres will save so much money on rain-checks.

Thank God for Alamo Drafthouse. There is still hope out there.

Stay tuned to the Oklahoma City Horror Movie Page for scary reviews and thrilling news from the realm of horror cinema. Also, check out The Ultimate Horror Movie Challenge and The Most Anticipated Horror Films of the Year for even more chills!