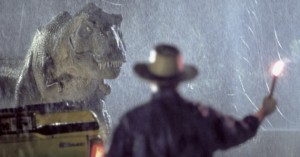 Longtime Steven Spielberg collaborator/producer Frank Marshall has provided an update on the status of Jurassic Park 4. The 5-time Oscar-nominee served up that tantalizing tidbit while working the promotion circuit for next month’s fourth installment in the Jason Bourne franchise, Bourne Legacy (in case you read the headline and got excited about a potential crossover where Matt Damon as Jason Bourne fights velociraptors).

Rise of the Planet of the Apes writers Rick Jaffa and Amanda Silver were recently hired on to script a fourth Jurassic Park, moving the belated project one step closer to becoming a reality. Spielberg is actively involved with development, but has officially withdrawn as a potential director.

Marshall informed Collider’s Steve ‘Frosty’ Weintraub that a fourth Jurassic Park movie “will be on the screen within two years,” citing advances in visual effects technology as an important factor that will benefit the project. Marshall promised JP4 is still going to utilize animatronics, so as to make the dinos not only “[feel] real to the audience, but [aid] the actors in their performances.”
Jaffa and Silver, for their part, have proven adept at writing animal protagonists (see: Caesar from Planet of the Apes), but their human characters to date haven’t been all that compelling. Then again, outside of series staples Sam Neil, Laura Dern, and Jeff Goldblum, the non-dino stars of the JP franchise have always been pretty one-note and forgettable. Moving on…