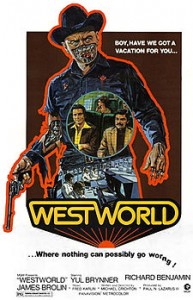 Westworld is a 1973 science fiction-thriller film written and directed by novelist Michael Crichton and produced by Paul Lazarus III. It stars Yul Brynner as an Android in a futuristic Western-themed amusement park, and Richard Benjamin and James Brolin as guests of the park and also Majel Barrett as Miss Carrie – the proprietor of the brothel in the Westworld themed area of the park.

Westworld was the last movie MGM produced before dissolving its releasing company, and was the first theatrical feature directed by Crichton.It was also the first feature film to use digital image processing to pixellate photography to simulate an android point of view. The film was nominated for Hugo, Nebula and Golden Scroll (a.k.a. Saturn) awards, and was followed by a sequel film, Futureworld, and a short-lived television series, Beyond Westworld.

Sometime in the near future a high-tech, highly realistic adult amusement park called Delos features androids that are almost indistinguishable from human beings. For $1,000 per day, guests may indulge in any fantasy, including killing or having sex with the androids. Delos’ tagline in its advertising promises “Have we got a vacation for you!” The androids are programmed to act in character for each of the park’s three themed “worlds” — WestWorld (the American Old West), MedievalWorld (medieval Europe), and RomanWorld (pre-Christian Rome). One of the attractions in WestWorld is the Gunslinger (Brynner), a robot programmed to start duels. Thanks to its programming, humans can always outdraw the Gunslinger and kill it. The guns issued to the guests also have temperature sensors that prevent them from shooting each other or anything else living, but allow them to “kill” the room-temperature androids.

Peter Martin (Benjamin), a first-timer, and his friend John Blane (Brolin), who has visited previously, visit WestWorld. Gradually, the technicians running Delos begin to notice problems spreading like an infection among the androids: the robots in MedievalWorld begin suffering an inexplicable number of systemic failures, a robot rattlesnake bites Blane, and against its programming, an android refuses a guest’s sexual advances. The failures increase until the robotic Black Knight kills a guest in a sword fight in MedievalWorld. The resort’s supervisors, in increasing desperation, try to regain control by shutting down power to the entire park, but this traps them in the control rooms, unable to turn the power back on while the robots run amok on stored power.
Martin and Blane, passed out drunk after a bar-room brawl, wake up in the WestWorld bordello, unaware of the breakdown. When the Gunslinger challenges the two men to a showdown, Blane treats the confrontation as a typical amusement until the robot shoots and kills him. Martin runs for his life as the robot implacably follows him.
Martin flees to the other areas of the park, but finds only a panicky fleeing technician, dead guests and damaged robots. He climbs down through a manhole to the underground control area, where the resort’s technicians have suffocated since the ventilation shut down. As the Gunslinger stalks Martin through the corridors, he throws acid into its face and sets fire to it with a torch. He also finds a woman chained up in the dungeon, but she turns out to be an android. Finally, the burned hulk of the Gunslinger attacks him one last time before succumbing to its damage. The film ends as Martin, apparently the sole human survivor, sits down on the dungeon steps in a state of near-exhaustion and shock, as the irony of Delos’ slogan resonates: “Have we got a vacation for you!”