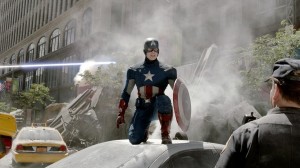 Marvel continued its trend of choosing surprising and intriguing directors to helm its superhero movies with the confirmation at Comic-Con that the Russo Brothers (exec producers on Community and directors of You, Me And Dupree) had nabbed the job of bringing Captain America sequel The Winter Soldier to screen.

Now Anthony Russo has been talking to IGN movies about getting the gig:

“It sort of came out of the blue, but [Marvel] were big fans of Community… You can sort of draw a line between some things we did on Community and a Marvel movie. I think if you look at some of the big genre episodes – you know, the paintball episodes, etc – there’s a cinematic sensibility being explored there that is in the language of those films.”

Russo also believes he and his brother’s background in TV – and as comic geeks – helped:

“Marvel is a big company, and they’ve made a lot of movies. These narratives are connected to each other. That’s not typical for a feature film, but television people are used to that. There are seasons and seasons of a show, and the history is very important it, obviously… My brother and I were comic book geeks from a young age, and big fantasy geeks. We got to talk to [Marvel] in detail about that. They knew that we understood the brand and their characters really well. We were just incredibly passionate about the movie, and they felt that it was the right match.”

While he’s not revealing much about the actual plot yet, he did give some clues to the tone of the sequel:

“We’re trying to grow him as a character. Certainly, he’s come a long way from where he started in World War II to where he is in modern-day America. So the character has room for growth because of that huge journey he’s been on, number one. Number two, the appeal of these movies is the ensemble. Captain America isn’t the only character in the film, and there are other characters that are perhaps lighter in nature.”

Don’t panic about the word “lighter”, though. Talking to The Huffington Post about how closely the film might follow Ed Brubaker’s Winter Soldier comic-book story. he replied:

“Well, we like the [story.] I can’t talk too much about specifics, that’s the way Marvel handles things. I can say in general that there’s sort of a darker, edgier sensibility at work there that we found appealing, and that is going find its way into Captain [America] in the modern day.”

He also thinks there are lessons to the learned from the success of The Avengers movie:

“For me, what I loved about the movie, which is what many if not most people loved about the movie, were the character interactions, those great character moments. You have people rubbing up against each other in a way that’s exciting and combustible. While all the special effects and the adventure, the thrill and the danger are fun, it was those character-to-character interactions are the heart of the film.”