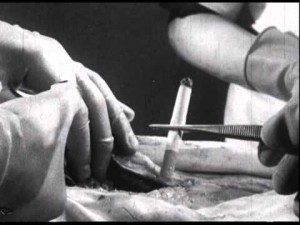 Ah, the supercut: where would YouTube and pop culture blogs be without those rapid-fire montages of various movie clichés and catchphrases? (We admit that we’re partial to It’s Gonna Blow! and Hitchcock cameos). Well, years before he made Piranha, Gremlins and Looney Tunes: Back in Action, Joe Dante put together the ultimate supercut. The Movie Orgy is a legendary compilation of trailers, commercials, industrial films, and scenes from low-budget B movies created in 1968 by Dante and his cohort Jon Davison. Through the magic of editing, kamikaze pilots divebomb into the ocean, only to segue into a commercial for a laxative that’s “guaranteed not to dissolve in your stomach.” Later, a surgeon takes a smoke break just before we cut to the title card “HEY KIDS LOOK it’s specially for you!”
As crazy at it sounds, despite the fact that none of the original footage was licensed or used with permission, back in the day Dante actually toured college campuses with The Movie Orgy, under the sponsorship of Schlitz Beer (and we’d wager that Mary Jane was also involved). Truth be told it’s closer to Everything Is Terrible! than your usual supercut, especially in ambition: its original length was 7 hours. But, as Dante explains, “We had to cut it to four hours because people were complaining it was too long. But the great thing about it was that at seven hours, you could leave, you could come back, you could get a pizza. It didn’t matter, because you didn’t miss anything. And there were several features that were intertwined, so there was a story that went through the whole thing.”
Dante will present that shorter version (which is 270 minutes to be precise) in person on Saturday, Aug. 11 at The Nightingale, in a new digital transfer made from his own unique print. There’s a $7 suggested donation.
The screening is being organized by Gabe Klinger and serves a bittersweet, dual purpose: it’s also a farewell party. The film programmer, with whom we’ve had many engaging chats about film festivals and cinema rarities, will soon be leaving Chicago for his new job at the MoMA International Festival of Film Preservation in New York. Though it’s pretty sad to see him go, we have to admit that sounds like one sweet gig. Gabe will be at the screening, so if you’re a cinephile you owe to yourself not only to check out this film rarity but also wish Gabe the best. We bet you dollars to donuts that it won’t be long before our pals at Gothamist are posting about his exploits.
The Movie Orgy screens Saturday, August 11, 8 p.m. at The Nightingale, 1084 N. Milwaukee Ave.