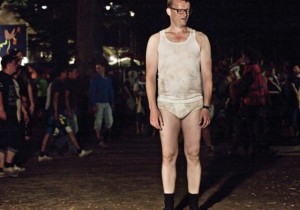 Klown, a comedy from Denmark about two men on a canoe trip who descend into all sorts of desperate debauchery, demonstrates how the semi-improv, jitter-cam mode of filmmaking has gone from being a style to a tic — a way to disguise how unreal a movie can be. Frank (Frank Hvam), who looks like Ed Begley Jr. with a face of frozen cluelessness, is a geek who’s just learned that his girlfriend is pregnant. Casper (Casper Christensen) is a family man and rabid horndog who organizes the trip to get action on the side.

The early scenes make us think we’re watching a trenchant satire of beleaguered males. But as soon as they leave their canoe, you start to notice that everything in Klown is a bit too precious and wacky to believe, from the brothel that Frank and Casper visit (it just happens to be run by their book-club cohort) to the “pancake lady” who beds both of them to the reefer that inspires Frank to strip down and run onto a rock-concert stage. Essentially, this is a Scandinavian version of The Hangover, but maybe the planned American remake won’t pretend to be something it’s not