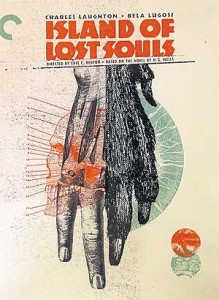 When the Motion Picture Production Code, a draconian set of moral censorship guidelines, came crashing down on Hollywood studios in 1934 it put an end to one of the most adventurous eras in American film-making, extinguishing a spark that was not to be revived until the early 1970s.

ISLAND OF LOST SOULS (USA, 1931, black & white, 70 min.) Directed by Erlc C. Kenton and starring Charles Laughton, Richard Arlen, Bela Lugosi, Leila Hyams, and ‘‘The Panther Woman’’ (Kathleen Burke). In English with optional English subtitles. Extras for the Criterion Region. A Blu-ray/Region 1 DVD edition include a commentary track by film historian Gregory Mark, interviews, a short film by the band Devo, who were influenced by the original, an illustrated booklet with an essay by writer Christine Smallwood, and much more. The Blu-ray Region B/DVD Region 2 UK edition by Masters of Cinema has fewer supplements, but includes both the Blu-ray and DVD discs in a single package. Both use the same source material for the transfer.

Hollywood had responded to the grim mood of the early Depression years in two very different ways: with bright, wisecracking, often cynical comedies and musicals; and with a series of horror films _ most of them made by Universal Studios, beginning with Dracula in 1931 _ that have since become screen classics.

But the sexual frankness of some of the comedies and what was perceived as unsavoury themes in some of the horror films were too much for the censors, and strict new rules went into effect to rein in screenwriters and directors.

Some films were banned outright or withdrawn from circulation and disappeared for decades.

Todd Browning’s Freaks was one of these; Eric C. Kenton’s Island Of Lost Souls was another.

After an altercation with its brutal captain, Edward Parker (Arlen) is thrown off the ship that is taking him back to his bride-to-be and stranded on an uncharted South Pacific island presided over by the sinister Dr Moreau (Laughton).

As the smiling Moreau, with his leisurely drawl, leads him from the shore to a palatial house, Parker notices strange things _ bizarre-looking, hulking “natives” appearing suddenly on the pathway to be dispatched instantly with a crack of a whip by Moreau, horrifying screams and moans coming from a building in the house compound, a general feeling of things being concealed.

It doesn’t take long for Parker to discover what is going on. Moreau conducts sadistic experiments on animals, cutting and reshaping them, without anaesthetic, into various semi-human forms, but which always retain features of their original species.

These experiments take place in a building called the House of Pain, the source of the screaming that had alarmed Parker.

Moreau enjoys his work, smiling and chatting easily as he performs his gruesome operations, and maintains strict discipline over the beings he has already transformed.

He presides over semi-religious rituals at which the human-like beasts chant in unison: “Are we not men?” _ a line borrowed from the film by the rock band Devo, a performance by whom is one of the extras offered on this disc.

If you’re not on the movie’s wavelength, these scenes, with Moreau lashing the air with his whip as his victims bemoan their doubts and misery, can seem corny until you look closely at his creations, masterpieces of movie make-up and costume artistry. One, a kind of cubist construct of lion, leopard and human faces that don’t align properly, is really startling (Masters of Cinema put him on the cover of their Steel Box limited edition of the film).

Another scene that makes a less potent impression now than it must have done at the time of the movie’s initial release is one in which Laughton’s Moreau equates himself with God. This blasphemy resulted in the film being banned in some US states.

By now most viewers are more than familiar with scenarios in which scientists attempt to play God _ and then inevitably suffer the dreadful consequences. But in Island Of Lost Souls, Moreau takes the idea in an especially uncomfortable direction, trying to prove that his creations are in fact human beings with souls by mating them with regular people.

He confines Parker in a room with Lota (Burke), a “leopard woman” who is untamed-sexuality incarnate. But when Parker, hijacked by his hormones, seizes and kisses her, he senses that he is embracing an animal and recoils. Smarting at the failure of his experiment, Moreau tries again when Parker’s resourceful fiancee tracks him down on the island, assigning one of his ape-like creatures to rape and impregnate her.

The Island Of Dr Moreau, the H. G. Wells novel from which the screenplay for The Island Of Lost Souls was adapted, was conceived as an anti-vivisection piece and lacks the cruelty and sadism of Kenton’s film (Wells hated the movie).

But it is this aspect of the film that makes it feel strong even from a contemporary perspective. There is no background music, and sound is used skilfully throughout to enhance the film’s sense of menace. The island jungle sets, apparently all built in the studio, look like the real thing, and the aura of fear and sadness projected by all of Moreau’s creatures comes across powerfully.

All of these things combine to create an atmosphere of dread that hangs over the whole film.

But best of all is Laughton’s repulsive performance as Moreau, so smug and self-satisfied in his sadistic work, but also driven and obsessed by it. Watch and listen to him closely during his initial encounter with Parker, and again in the still-shocking scene in which he finds himself at the wrong end of his vivisection instruments.