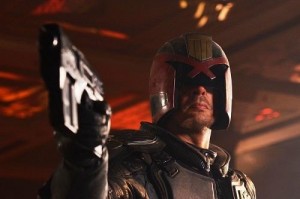 Dredd 3D star Karl Urban is quick to point out the immense disparities between his sci-fi epic and the one that Sylvester Stallone brought to the world in 1995 called Judge Dredd.

“When I read the script, it became obvious to me that what we were endeavoring to do was completely different. Tonally, you couldn’t get more different,” Urban told us recently at Comic-Con. “Going into this movie I watched the Stallone version to see what worked and what didn’t work. The way that I approached the character was not to have the character be a posturing, bellowing character that was kind of grounded in ego.”

“To me, that wasn’t the Dredd that I knew. To me, it was far more interesting to have a character with this inner rage and struggling to contain it, rather than letting it all explode,” Urban said.

“That’s the direction that I was going in. I decided that what I wanted to do was find the humanity within Dredd. He’s not a superhero. He’s a cloned man, but he’s just a man. He doesn’t have superhero powers. His heroism is defined by the fact that he’s walking into a building while everybody else is running out.”

One way his film is different is Urban never takes off that iconic helmet — as seen in the Dredd 3D red band trailer — even though Stallone did in his film.

“The challenge was: How do I convey all that without the eyes?” Urban wondered. “There’s a wariness too about the character which is really important.”

Urban used all the tools that were available to him from his vast amount of training and experience. “Your voice becomes extremely important. In my research I discovered a passage in one of the comic strips that described Dredd’s voice as a saw cutting through bone,” he recalled.

“Other tools were the physicality. What can I express with my movement? It’s also really important to identify where the humor lies. That’s one of the things I really loved in the comic is just the really dry, dark humor.”

The star believes that the story of Dredd — who is law officer, judge, jury and executioner in an explosively violent future — is more relevant than ever. But, that’s not what drives Urban.

“To be honest with you, I didn’t think about how this movie was going to be perceived or the relevance of it when making it. To me, my mission was to a) honor the creation that John Wagner and Carlos Ezquerra first created back in 1975 as best I could and to b) service the script and be in the moment and make the best film we could.”

Our hero is matched, as any good film does, by a killer villain. Lena Headey’s Ma-Ma is a worthy adversary in Dredd 3D, and Urban was downright frightened by what the actress brought to the set.

“I think there is a scary, beautiful, violent, way off-beat, amazing performance that Lena has delivered in this film. She’s enigmatic. You’re drawn to her when she’s on the screen. The choices that she made were so interesting,” Urban said.

“I have to confess, there was one day we were shooting the scene where I’m confronting her and we’re at opposite ends of the room and I’ve got my helmet on looking at her and she’s looking at me. And she just starts laughing, manically laughing. And I just feel within me the rage growing. She is that (expletive) good. She knows how to push your buttons.”