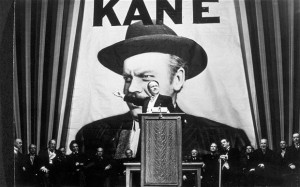 Orson Welles’s 1941 feature tracks the rise and fall of an American media mogul from the Colorado backwoods to a lonely death in his fairy-tale palace. Every 10 years Sight and Sound magazine has canvassed a caucus of critics for their top 10 films. Every time since 1962, Kane has taken the top spot. The results of the latest poll will be published on August 2. And for the first time in 50 years, there is a distinct possibility of a Kane mutiny.
This week I finished making a radio documentary about the 50-year reign of Welles’s masterpiece – and heard how it might all soon be over, thanks to a change in constituency boundaries. The last time the survey was conducted, 145 mainly anglophone critics were polled. This time an 1,800-strong body of writers, curators and directors have been asked, a group representing the film cultures of most countries in the world. An electorate as broad as that might not feel the critical anxiety of influence that has kept Kane on its pedestal. Tellingly, the longlist, at 2,000 titles, is already much longer than its predecessors.
A decade ago, Hitchcock’s Vertigo, Renoir’s La Règle du jeu and the two Godfather films were the principal threats to Kane’s status. Eisenstein’s Battleship Potemkin also had Welles’s picture in its sights – along with Singin’ in the Rain and Fellini’s 8½. But this year it might have to reckon with younger masterpieces. The bleakly brilliant Austrian director Michael Haneke may see his Caché or The White Ribbon flutter into the top 10, for example.
Nick James, editor of Sight and Sound, isn’t quite knitting beside the guillotine, but he does think that it would be good for the medium of cinema to hear that its endeavours did not reach their zenith 71 years ago. “I do think it will be great for younger critics if they didn’t have to do due obeisance to Welles, who’s been at the centre of an industry of admiration for a long time.”

James has never put the film on his own top 10. He describes it as “estimable”. (You can imagine Welles’s eyes narrowing at a glacial superlative like that.) “If Kane doesn’t win,” he says, “part of me will want to leap for joy – and the other part of me will be slightly sad for Orson.”
It’s an appropriate response. Being slightly sad for Orson is part of the reason why the film achieved its primacy. Welles was 25 when he directed, starred in and co-wrote Kane. He was the boy genius who persuaded America that it had been invaded by Martians (with his radio version of War of the Worlds) and persuaded RKO studios to turn itself into his personal toybox. By the late Fifties, however, he was considered – somewhat unfairly – to be profligate, unreliable, difficult. He spent much of his later years pretending not to see the embarrassment in the eyes of producers who wouldn’t invest in his next picture.
These wilderness years coincided with the rise of a new generation of European critics and directors who were ready to celebrate him as a prophet of their own ideas. Welles was the consummate auteur – they loved consummate auteurs. The canonisation of Kane was a kind of consolation prize: if the studios wouldn’t give him his due, then his fans would celebrate him instead.
Jean-Luc Godard, François Truffaut and Claude Chabrol – the forces of the French New Wave – were ready to carry him aloft. But, chief among his fans was Peter Bogdanovich – the director of The Last Picture Show – who became Welles’s staunchest supporter. “Kane is a picture that announces its own greatness,” he tells me. “When someone asks you ‘what is the greatest film ever made?’, it’s pretty easy to say, ‘well Citizen Kane looks like the greatest film ever made, we’ll call it that’.”
To Bogdanovich, though, the question is pretty vulgar. “It’s an absurd game we’re playing,” he says. He has declined to draw up his own list, preferring to file a piece to Sight and Sound on the futility of the exercise. And he has a prediction to make: Kane will be toppled.
“I don’t know what it’ll be,” he admits, “but if it’s something made recently I’ll throw tomatoes. If it’s Star Wars or The Godfather or Saving Private Ryan there will be a scream from me that will be heard around the world.”
Not all, however, are so sure that Kane is about to be fired. “I just don’t see what would take over from it,” reflects Welles’s biographer David Thomson. “Neither Vertigo or The Godfather is exactly a new film.” But if Kane does win, he reasons, its rule will be eternal. “It’s clear that by 2022 this medium will be so different that you probably won’t be able to call it cinema anymore – so Kane may be the all-time classic movie when cinema is regarded as something that’s not done anymore, like Commedia dell’arte, or cathedral-building.”
Charles Foster Kane raised an empire and lost an empire. Orson Welles did something similar. Kane, though, has never undergone a comparable collapse in fortune. And if Thomson is right, being hailed for 50 years as the best film ever made may simply be the first stage on the road to a higher status – as the emblem of the medium that made it.