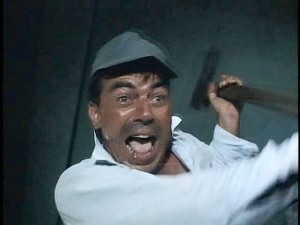 The word “tasteless” may best describe the double feature of horror films landing at Cinema Paradiso this weekend, and not because buckets of blood will flow on the silver screen. Rather, it’s the laughably bad plot lines and uniformly terrible B-movie acting – staples of the splatter-film genre – that will complement the monthly “Splatter-Rama” event.
Declassing up the joint Sunday is the 1964 splatter classic “Two Thousand Maniacs!” from Fort Lauderdale’s own schlock-horror maven Herschell Gordon Lewis, the second in the director’s so-called “Blood Trilogy” (after 1963’s “Blood Feast,” which screened at June’s “Splatter-Rama.”) The plot concerns a half-dozen Yankee tourists who are lured to their deaths by a band of nefarious, redneck townspeople. The film is being paired with “I Drink Your Blood,” a 1970 grindhouse film whose title alone suggests its quality, about a bloodthirsty cult of nomadic, Satanist hippies who cruise into a small town and terrorize, pillage and murder its inhabitants.

“I’m a huge horror and gore fan, and some of the old ’60s films are very feminist, and some of them have political nuance that’s often overlooked,” says Mark Pollack, who is organizing Splatter-Rama with Radio-Active Records in Fort Lauderdale. “These movies were made to be low-budget-looking and funny, and didn’t take themselves as seriously as, say, ‘Mothra vs. Godzilla’ or something Ed Wood made.”

Expected to join the gore fest is Lewis himself, who will introduce “Two Thousand Maniacs!” and, as Pollack puts it, will perhaps “sing along to the movie’s catchy tunes.” If that’s not enough of a selling point, the event also will feature eats from food trucks On the Slide and Munch Cakes; horror movie-themed tunes spun by DJ Sensitive Side; and a movie swap, where traders can browse or sell their horror flicks in DVD, VHS,Blu-Rayor Betamax format.