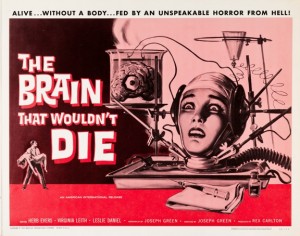 Demented surgeons who know no bounds, crazed doctors keeping brains alive, abductions and decapitations – you can tell Steve Seid had an enormous amount of fun putting together the program for this year’s Summer Cinema on Center Street, a free outdoor movie series which kicks off on Saturday August 4.

“I wanted something different from common currency films. I wanted to pull out some of our more disgraceful examples,” he says, laughing.

Seid, Video Curator at Pacific Film Archive, delved into the museum’s 18,000-strong collection of films to come up with his selection of 16-mm prints for the series, which takes place over three weekends in August and is organized jointly by Berkeley Art Museum/Pacific Film Archive and the Downtown Berkeley Association. The event was launched last year and proved immensely popular, drawing up to 400 people to the Bank of America parking lot for each screening.

The films, which will be shown on the wall of the future Berkeley Art Museum/Pacific Film Archive, are all in the classic B-movie “mad scientist” genre.

In The Atomic Brain on August 4, an aging spinster finances the brain transplant experiments of a deranged scientist in the hope that her brain can be transplanted into the body of a younger woman. Nancy Davis (aka the future Mrs Reagan) stars in Donovan’s Brain on August 11 in which a crazed surgeon extracts the brains of monkeys, keeping them alive outside their bodies. And, on August 18, a demented doctor grafts his decapitated fiancées’s brain onto the body of a disfigured model in The Brain That Wouldn’t Die. Needless to say, mayhem ensues.

Each of the movies, which are on average 80 minutes long, will be screened at around 9pm at twilight, and they will preceded by a program of pre-movie mania, also orchestrated by Seid. This includes a music, some brief and lively lectures and readings, short films, and “freaky performances.”

“What can you say: outdoors and off-the-wall. Cerebral cinema is a no-brainer,” says Seid.

Berkeleyside is proud to sponsor the Summer Cinema on Center Street for the second year.

Programs on August 4, 11 and 18 begin at 7:30pm. Everyone is encouraged to bring their own chairs and/or blankets. For full information, visit the BAM/PFA website.

To find out about more events in Berkeley and nearby, check out Berkeleyside’s Events Calendar. We also encourage you to submit your own events.