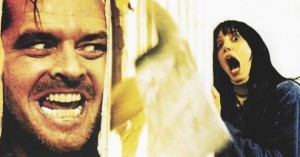 LA Times‘ Movies Now says that Warner Bros. is “quietly exploring the possibility of a prequel” that delves into the macabre backstory concerning what transpired at the haunted (…or is it?) Overlook Hotel, prior to the arrival of Jack Torrance and his family. Details are mostly being kept secret right now, so it’s difficult to say how far the trip back in time will be. It’s worth nothing there’s no implication the project will expound upon Jack’s history as a struggling alcoholic writer, beyond the allusions in Kubrick’s film (and more explicit references in King’s book).
The members of the Torrance family are tormented by some pretty freaky visions, so it’s difficult to imagine how a prequel would not lessen the impact of those events – especially, as portrayed in Kubrick’s film, where it’s never clarified how much madness was the handiwork of malicious supernatural entities. Moreover, a prequel about the experiences of previous tenants at the Overlook Hotel risks recycling plot points from The Shining, with diminished returns (see: The Thing prequel).

On a note less likely to incite rage from Screen Rant readers: the Shining prequel involves producer Bradley Fischer, as well as writer-producers Laeta Kalogridis and James Vanderbilt. Their horror-thriller filmography is rock-solid, including Zodiac and Black Swan (both produced by Fischer, the former written by Vanderbilt) and Shutter Island, which Kalogridis wrote and produced alongside Fischer. Kalogridis seems like an ideal candidate to write the story/script, as she demonstrated a knack for pulpy psycho-horror fare with the aforementioned Shutter Island.

Things are just starting to take shape on this Shining prequel. Moreover, Fischer, Kalogridis, and Vanderbilt have other priorities on their to-do list, including, Altered Carbon and White House Down. Hence, it may be a while before we hear much more about this project.