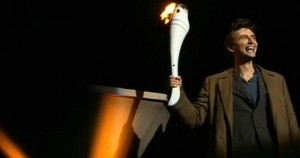 For years, Doctor Who fans have eagerly awaited the chance to see The Doctor (Doctor Who?) light the Olympic Flame – as prophesied by the show’s 2006 episode “Fear Her.” Of course, with the whole world watching, it was unlikely that the Olympic committee would buckle to sci-fi fan petitions and allow former Doctor, David Tennant, to kick off the ceremonies by carrying the torch in the final leg and ignite the Olympic flame in London. However, with high-profile appearances from other fictional UK celebrities – most notably Daniel Craig as James Bond escorting the Queen – many Doctor Who fans were expecting to see the TARDIS materialize somewhere (or sometime).

While the TARDIS materialization sound did punctuate the end of Queen’s “Bohemian Rhapsody” during the Games’ opening ceremony pop culture montage, further Doctor Who references had been planned for the show – only to be scrapped last minute.

The TARDIS sound is definitely iconic but in a crowded stadium full of cheering attendees, Britain’s Doctor Who hat tip took a backseat to other pop culture spectacles – such as the blockbuster entry of Bond and the Queen (which featured actual footage of the actor and Monarch before stunt doubles jumped out of a helicopter over the arena).