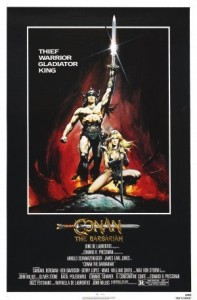 “Conan the Barbarian” The future governor of California plays a sword-weilding barbarian — as good a credential for public office as any, most likely — in this late-night screening hosted by Cort and Fatboy. (Bagdad Theater, Friday)

“Emperor of the North” The late Ernest Borgnine stars as a sadistic train conductor in this 1973 film that was shot in Oregon. (Hollywood Theatre, Saturday and Sunday only)

“Hedwig and the Angry Inch” The audacious transvestite musical written by, directed by and starring John Cameron Mitchell is shown under the stars. (Northwest Film Center, Thursday August 9 only)

“Lady Dragon” Cheesy 1992 action movie about a CIA agent trying to stay retired is the occasion for a game of B-Movie Bingo. (Hollywood Theatre, Tuesday only)

“Taps” The teenaged (or thereabout) likes of Tom Cruise, Timothy Hutton and Sean Penn star in a 1981 drama about a mutiny at a military school. (Laurelhurst)