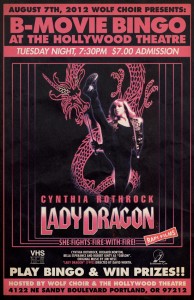 Cynthia Rothrock plays Kathy Galagher, an ass-beating lady who lives in a rat infested hellhole in Indonesia and fights sweaty dudes for money. However, she is also a retired CIA agent supposedly (which is very easy to miss) who’s husband gets murdered in a flashback. Now the only thing driving her is to get sweet revenge on Ludvig Hauptman, a beefcake arms dealer and rich-as-hell crime lord (played by Aussie superstar Richard Norton) who also happens to be pure evil and an expert martial artist. After a failed attempt at killing Ludvig in his own bar called the “Super Star”, Kathy is held hostage, beaten and left for dead, only to be rescued by a mute seemingly homeless Karate master and his tiny interpreter grandson. The pair nurse Kathy back to health using a massive wooden (Ewok Village?) structure that Kathy must train on daily and eat really filling white stuff and gross tea in order to become a Lady Dragon. Once Lady Dragon status is achieved (which means nothing except for the mute Grandfather making strong eye contact and doing a rigid cobra-looking hand gesture with his fore arm), Kathy begins working for Ludvig’s company some how with out being recognized, gets double crossed by former CIA agent friend “Gibson” (Robert Ginty) and has a mano y mano in a warehouse with Ludvig until they are both really beat up. Directed by David Worth.