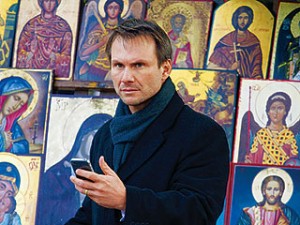 Christian Slater plays a retired FBI agent in Assassin’s Bullet who happens to be hanging around Sofia, Bulgaria, when he’s asked (by Donald Sutherland, as the U.S. ambassador) to unmask the vigilante who’s offing high-priority terrorists. The cockeyed C-quality B movie, shot on location with a Balkan supporting cast and crew, mixes a precarious pileup of visual clichés with over-staged action sequences. It also mixes the efforts of a faded American movie star with those of actress Elika Portnoy, who does a weird, wooden interpretation of multiple femme roles.