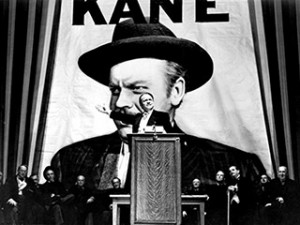 We hope somewhere in movie-character heaven Charles Foster Kane still finds comfort in the memory of his childhood sled, because for the first time in 50 years Citizen Kane doesn’t top the Sight & Sound poll.

Every ten years since 1952, the London-based film magazine published by the British Film Institute conducts a sweeping survey of renowned critics and filmmakers to determine what many cinephiles consider to be the definitive list of the greatest movies ever made. The very first poll placed Vittorio De Sica’s Bicycle Thieves at the No. 1 spot. Ever since 1962, however, Orson Welles’ dazzling fake biopic has taken top honors.

Until 2012, that is. This year Sight & Sound tapped 846 critics and 358 directors to submit individual Top 10 lists. When all the ballots were tallied and aggregated, the magazine’s editors discovered that both the critics and directors had said, “Rosebud, schmosebud.” The critics’ pick for the new No. 1 is…
Vertigo

Alfred Hitchcock’s Vertigo! The Master of Suspense’s otherworldly Möbius-strip reverie on love, loss, and obsession, about a police detective in love with a woman who may be a ghost–or possessed by a ghost, or pretending to be a ghost, or…brain…melting…down–has long been considered the strongest contender to dethrone Kane, having popped in at No. 2 on the Sight & Sound critics’ 2002 ranking. On the other hand, the directors, who this time included Woody Allen, Martin Scorsese, Quentin Tarantino, Bong Joon-ho, Guillermo del Toro, and Michel Hazanavicius, picked Yasujiro Ozu’s contemplative domestic drama Tokyo Story for No. 1. Here are the full lists.

Kane topped the list for 50 years not just because it’s one of the most entertaining films ever made but because of what it represented in the annals of film history: the emergence of the concept, within Hollywood at least, that a writer-director can be a singular auteur (as much as Pauline Kael, not to mention earlier film artists like Charlie Chaplin, F.W. Murnau, and D.W. Griffith, would beg to differ); as one of the rare times that a writer-director has been given virtually a blank check from a Hollywood studio to put his vision on screen; for its pioneering use of wide-angle lenses to achieve deep-focus cinematography; for its circular, self-reflexive narrative that throws out all screenwriting-class notions of a three-act script. But Nick James, the editor of Sight & Sound, suggests that critics and filmmakers voted more for personal than objective, historical reasons this time.