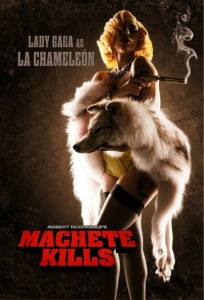 Lady Gaga will make her acting debut in Machete Kills from Robert Rodriguez.

Tweeted Rodriguez: “I just finished working with @LadyGaga on @MacheteKills , she kicked SO MUCH ASS! Holy Smokes. Blown away!”

Tweeted Gaga today: “Yes its true, I will be making my debut as an actress ln the amazing MACHETE KILLS BY @RODRIGUEZ IM SO EXCITED!!! AH! Filming was insane.”