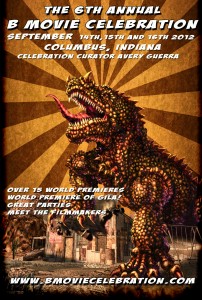 It`s time for the 6th Annual B-Movie Celebration in Columbus, Indiana. It`s time once again to gather and pay tribute to B-Movies past, present and future. As we all know, the B-Movie has had a long and humble tradition beginning with the double features of the 1930s and 40s where a lower-budget production would be used to fill the bottom half of a double bill. Within that time, there were hundreds of low-budget westerns, horror features, comedies and even film noir (“Detour” from 1946, for example) filled screens and entertained audiences as companies like Republic, Monogram, PRC and Lippert kept them coming.

The drive-ins came along in the late 40s and 50s and soon more companies came to meet the demand like American International Pictures, who were best known for their monster flicks, teenage juvenile delinquency pictures, sci-fi epics and beach party movies. What`s more, many budding film talents found their first work in these conditions, often working for the man who would be called “King of the B`s”, Roger Corman. This would continue on through the 60s and 70s as people like Peter Bogdanovich, Monte Hellman, Jack Nicholson, Allan Arkush, Joe Dante, James Cameron, Ron Howard and many more.
The 80s and 90s saw another boom in the B-Movie business with the arrival of the videocassette. Now, movies could be brought straight to video for the home market and still more prominent names appeared to produce these direct to video features. Even so, there were still lower budget pictures brought to the theatres and have earned massive cult followings, including Stuart Gordon`s “Re-Animator” and Joseph Ruben`s “The Stepfather”. Other prominent names to appear during this period include Charles Band`s Empire and Full Moon companies, Menahem Golan and Yoram Globus` Cannon Films.
This little history only scratches the surface of the vast history of theB-Movie`s influence and popularity. Some have said that the B-Movie is dead, but they`re wrong. Outlets like the SyFy channel regularly show lower budget pictures from people like B-Movie Celebration favorite Jim Wynorski and the Asylum company, which regularly produces well-received science fiction and fantasy items for the SyFy channel and for the DVD and Blu Ray market.
This year, the The B-Movie Celebration pays tribute to new and emerging B Movie masterpieces inlcuding films from South Africa, The Ukraine, The United Kingdom. This year we are having over 10 world premieres plus the premieres of GILA! and Return of The Killer Shrews.
And we can`t forget the Golden Cob Awards in which the cream of the crop of B-Movie talent is awarded and honored for their work. This, like every aspect of the B-Movie Celebration, continues to grow and expand every year with recipients of the awards present to take their slice of B-Movie glory.
That`s the B-Movie Celebration. 3 days of basking in the glow of killer B-movies and hanging out with many of the stars and filmmakers. There`s networking opportunities, lots of star gazing and loads of movies to see. We are proud once again to bring you an experience in B-Movies that we hope will enrapture you and enthrall you. So let the B-Movies begin and let a weekend of cinematic fun and excitement commence!