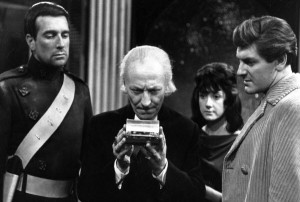 Is Sara Kingdom officially a companion? Is the Christmas Day episode – in which Hartnell’s Doctor breaks the fourth wall for the first time in the series by raising a glass to everyone back home – as rubbish as it sounds? Only three of its episodes are known to exist in their entirety and it’s impossible to judge the remainder on audios, all-too-brief clips and telesnaps alone, but let’s pick out the key features in this all-dancing, all-exterminating extravaganza.

Triumphs, including exceptional slices of Doctor Who, have rarely been as hard won as this.
The story goes that BBC Managing Director Huw Weldon’s mother-in-law, Mrs L.G. Stroud, loved the Daleks, and so the production team hoped to please him and her (but mainly the public, whose tastes Weldon believed were generally reflected by those of Mrs Stroud) by stretching a Dalek story to twelve episodes (and let’s not forget there had already been a linking, cutaway episode five weeks earlier in the form of Mission to the Unknown). The result is a ‘travelogue’ type of story, in which the action is spread across several different times and places, a format pre-empted by Keys of Marinus and the previous season’s Dalek story The Chase. As with Marinus, the plot is driven by a classic MacGuffin, in this case the Taranium Core, which the Daleks and their arch ally Mavic Chen intend to use to power the awesome Time Destructor.

Cue a relentless chase across time and space as the Doctor cheekily pinches this (plot) device and is pursued by his adversaries to Earth in its futuristic, contemporary and early twentieth-century guises, not to mention the Great Pyramid of Giza, plus the jungle planet of Kembel, the equally jungly planet Mira, the prison world Desperus, and the volcanic Tigus. In fact, The Chase would have been an apposite title for this serial if there hadn’t already been one with that name; it’s real cat and mouse stuff as the Doctor and co. constantly try to outwit their pursuers. But there will be a terrible price to pay for their ultimate victory…

One thing that makes this story so entertaining is its variation in tone. Yes, there is notable grimness; aside from the deaths of two of the Doctor’s companions, there’s the grim theme of fratricide when Sara Kingdom kills her own brother, Bret Vyon. There’s also the striking, verbally violent ending to Episode Four, The Traitors, in which the misguided Sara instructs her colleagues in the Space Security Service that the Doctor and Steven ‘will be shot on sight – but aim for the head.’ Hardly the stuff of Saturday tea-time adventures for children, is it?

But there’s also comedy in the shape of the Monk, played, as in The Time Meddler, by Peter Butterworth with a gleam in his eye; and the knockabout nonsense of Christmas Day episode The Feast of Steven, which doesn’t feature the Daleks or Chen but does feature a daft 1920s Hollywood silent movie set and a humorous encounter with 1960s English police. This jamboree of wildly different styles and settings actually improves on the similar approach used in The Chase; unlike that whopper, it’s generally competently done – often much better than competent – and it’s The Fast Show of Doctor Who: don’t like the Keystone Cops stuff? Then don’t worry, we’re off to Ancient Egypt in a moment. Don’t care much for the Monk? No matter – he’ll be gone soon and we can get back to the serious business of the Doctor vs. the Daleks. That said, The Feast of Steven does leave a lot to be desired in the eyes of many, and besides, how could the idea of Doctor Who on Christmas Day ever catch on?

The First Doctor displays his relentlessly ruthless streak, stopping at nothing to prevent the Daleks from activating the Time Destructor, even while casualties are made of all those who are close to him bar Steven. He’s not pitiless and may regret the waste of lives by the end, but he’s frequently merciless up to that point. Look how he ambles casually between the pyramids in Ancient Giza as the Daleks and Chen broadcast an ultimatum regarding his captured friends’ lives.

Steven is well-played by Peter Purves as always; unlike many companions, he’s solid and never annoys. But perhaps the real surprise in Masterplan is the recently-acquired companion from Troy, Katarina. Adrienne Hill makes the most of her brief time on Who, giving her character a credible air of innocence and otherworldly gentleness – she doesn’t know what tablets are, and thinks the Doctor is a god taking her on a journey through the underworld. However, when it comes to the crunch, Katarina shows her mettle, bravely sacrificing herself via a spaceship airlock to ensure that the evil convict Kirksen can’t get control over the Spar, which the Doctor so desperately needs if he’s to evade the Daleks. This must have been a shock for viewers in 1965; no sooner has a companion been introduced than she’s been killed off. It makes sense, as it’s hard to see how Katarina could really have developed as a long-running, regular character. She’s killed off early in this one so that Sara can be used in her place, as the latter can more readily fulfil the role of an ‘action’ character.

Nicholas Courtney plays Bret Vyon as a hardened soldier – a tough cookie, not amusingly pompous or lovable like his more famous Brigadier. Jean Marsh makes the most of Sara Kingdom, who initially appears ruthless and dedicated to the Space Security Service but who later suffers grief and a guilty conscience when she realises that her unswerving obedience has led her to obey orders far too readily, including wrongly killing her own brother. She’s not a character we can easily feel affection for, and even her supposed toughness doesn’t quite ring true, as she screams when she sees the Monk swathed in bandages, mistaking him for a mummy. That said, it’s impossible not to feel shocked when the Time Destructor ages her to death in that grim finale.

‘The Doctor vs. the Daleks’ fixture may have been starting to feel stale for viewers by this point. “They’re coming after us again,” says the Doctor, as if in recognition of this. But the metal monsters emphatically restate their nasty credentials several times; they even exterminate some cute white mice, the utter bastards! There’s a terrifically cold line near the end that Russell T. Davies would surely have loved to have written, when the Dalek Supreme orders its cohorts to kill Chen: “Take him away and exterminate him. But do not fire in here. You will damage us, and some of the controls!”

He’s consistently the most entertaining thing in this story, a silky smooth operator with a purring voice who oozes charm while cunning, arrogance and complete untrustworthiness vie for supremacy on his saturnine features. His motives are clear from the outset: “I am Guardian of the Solar System. Would you be satisfied with just a part of a galaxy?” He presumes he can use the Daleks as allies to conquer the universe before casting them aside, but we know it will end badly for him as early as the second episode, in which a Dalek refers to him as ‘the creature from Earth.’

There aren’t any truly deep, underlying themes in Terry Nation and Dennis Spooner’s scripts, which could be seen as workmanlike by some; sacrifice, bravery, treachery and ambition are the order of the day. The plotting and counter-plotting between Chen, the Daleks and their Alliance and the Space Security Service, plus the use of certain motifs such as a prison planet, prefigure Nation’s work a decade later on Blake’s 7. Where this story scores highly is in its presentation. Some of the sets by Barry Newbery and Raymond P. Cusick are excellent, particularly the conference room in the Dalek city, the jungles of Kembel and Mira, and the matter dissemination chamber on Earth. A falling-out between director Douglas Camfield and incidental music maestro Dudley Simpson led to a more percussive score by Tristram Cary being used for this serial, and it works, underscoring the more severe moments perfectly.

The twelve episodes are replete with standout scenes and moments: the Doctor returning to the TARDIS in the jungle on Kembel after spying on the Dalek city, only to find that there are Daleks waiting outside his ship in episode one’s cliffhanger; the eerie ‘cosmic dripping tap’ sound effect of the matter disseminator; Mavic Chen’s face as he surveys a burning jungle from within the Dalek city on Kembel, the light of the fire from outside flickering across his face; the diverse alien members of the Dalek alliance thumping their claws and fists on the conference table – a strikingly cinematic moment worthy of Stanley Kubrick.

‘A waste… what a terrible waste,’ murmurs the Doctor before they solemnly depart in the TARDIS. Triumphs, including exceptional slices of Doctor Who, have rarely been as hard won as this.