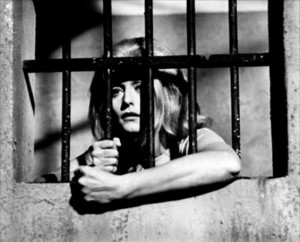 The Naked Kiss (1964) is the prototypical Sam Fuller film, from the leering paperback title to the in medias res opening that pounces like a tawdry B-movie trailer, with Constance Towers’s call-girl Kelly swinging her high-heel shoe at her pimp — and the camera. The moment epitomizes Fuller’s wisdom: “Young writers and directors, seize your audience by the balls as soon as the credits hit the screen and hang on to them!”

What follows is the story of Kelly’s attempted regeneration, as she tries to ingratiate herself with the citizenry of a small town that, the more she discovers of it, makes Peyton Place look positively idyllic: A place of eerily mannequinlike first citizens, crooked cops and endangered children. As the movie progresses, the stylized, punchy readings and incessant hard shifts between long shot and tackling close-ups have the effect of making you feel as though you might possibly be going insane.

In 1967’s Two or Three Things I Know About Her…, Fuller admirer Jean-Luc Godard said that “ … living in modern society is virtually like living in a giant comic strip” — but Fuller was the first to cinematically illustrate this fact.

Fuller is the subject of a six-film, weekendlong mini-retro at the American Cinematheque, not the first career celebration. By the end of his life, Fuller had many such opportunities to ham up his role as crusty Grand Old Man of the cinema — and why not? His backstory wholly justified his romantic conception of himself.

It was an appropriate beginning for a career that would never be accused of good taste.

After getting a foothold in Hollywood as script ghostwriter and pulp novelist, Fuller became a 29-year-old private in the U.S. Army’s First United States Infantry Division, which saw action in seemingly every major conflict of WWII’s European theater. These frontline experiences would form the basis of his third feature and first certifiable hit, 1951’s The Steel Helmet, which made Griffith Park a stand-in for the Korean front.

Per Fuller, The Steel Helmet was “written quickly, like a reporter on a scoop,” and shot a mere six months after U.S. intervention on the Korean peninsula had begun. In it, all of Fuller’s signature attributes are in place. There is roving violence, a wholly intuitive existentialism in uneasy coexistence with patriotism. In Sergeant Zack, played by fellow vet Gene Evans, we meet the irate hero whose defining code is survivalist, while war orphan “Short Round” inaugurates a tradition of absurd character names: Cuddles, Candy, Buff and all of those Griffs.

It is impossible to say as to what degree Fuller’s cartoonish abstraction was conceptual, or if instead, in the words of his most eloquent (and typically grudging) admirer, the critic Manny Farber, Fuller’s mind was “an unthinking morass at best.” (Fuller’s posthumous 2002 autobiography A Third Face, written largely with assistance after a 1994 stroke, does little to clear the air.)

But the results shriek for themselves: 1957’s Forty Guns, with Barbara Stanwyck as an Arizona Catherine the Great, commanding a private army of whipped cowpokes, represents Fuller’s fractured take on the Western, while its seamless sequence shots in black-and-white CinemaScope show his mastery of the format.

The Cinematheque series’ namesake, 1961’s Underworld U.S.A., stars Cliff Robertson as a vengeful thug opportunistically attached to a bimbo (Dolores Dorn) who cherishes the same affluent society aspirations as The Naked Kiss’ Kelly (“We gotta right to climb outta the gutter and live like other people.”) Underworld U.S.A.’s progenitor is 1953’s Pickup on South Street, with Richard Widmark playing a pickpocket punk, a film whose optimistic, clean-slate ending in no way dispels the still-startling brutality that has preceded it.

Finally, there’s 1963’s Shock Corridor, which has Peter Breck’s journalist committing himself to an asylum for a story, only to discover therein a microcosm of the country’s social ills. It’s the film that most fully reveals the irony of the American dream of Fuller’s outsiders: The decent “civilization” that they yearn to join … simply doesn’t exist.