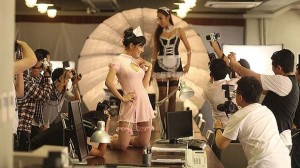 ”THIS film has been classified as vulgar comedy,” runs a mock-official disclaimer at the start of Vulgaria, the latest from prolific Hong Kong director Pang Ho-Cheung.

Shortly after, prudish viewers are allowed 10 seconds to leave the cinema – which leaves the rest of us free to enjoy this friendly, unbuttoned, often hilarious skit on the Hong Kong film industry, made on a low budget and filled with in-jokes and self-referential humour.

The hapless hero is a B-movie producer played by Chapman To, who bears a faint resemblance to Matthew Broderick, especially when he’s wincing under strain or confiding secrets to the camera.
Advertisement

Pang has gone out of his way to make the dialogue as crude as possible, most impressively in the scenes involving an irritable gangster (Ronald Cheng).

Still, there’s no on-screen nudity and a great deal is left to the imagination: a key running gag centres on the repressed memory of a traumatic encounter with a mule. Be sure to stay through the credits for a punchline that fills in some of the blanks.