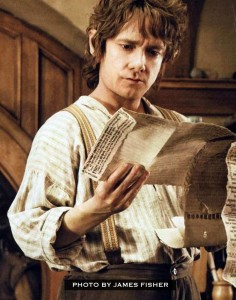 Daniel Craig is back as James Bond in “Skyfall,” the super-spy’s first adventure in four years, one of the longest 007 hiatuses in the franchise’s 50-year history.

And Bilbo Baggins goes jewelry shopping for an evil ring in “The Hobbit: An Unexpected Journey,” the first installment in Peter Jackson’s three-part prelude to his Academy Award-winning adaptation of J.R.R. Tolkien’s “The Lord of the Rings.”

Ian McKellen, Cate Blanchett, Elijah Wood and others reprise their “Lord of the Rings” roles, but “The Hobbit” hinges on newcomer Martin Freeman as Bilbo. The filmmakers were so set on him that production halted for three months while Freeman returned to “Sherlock,” the British TV hit in which he plays Dr. Watson.

“It was sort of unheard of for a big-budget movie, but because we wanted him so badly, the studio supported us, and we made that provision in our schedule,” Jackson said. “He carries the movie. You get that casting wrong and you’re in huge trouble.”

Here’s a look at other upcoming highlights:

Adam Sandler’s in voice-only mode as Dracula in the animated monster mash “Hotel Transylvania.” Joaquin Phoenix stars as a World War II vet mesmerized by a cult leader (Philip Seymour Hoffman) in “The Master.” For baseball fans, there’s “Trouble with the Curve,” starring Clint Eastwood as an old-timer on a scouting trip with his daughter (Amy Adams).

Gordon-Levitt underwent three hours of makeup each day to look more like Willis. He repeatedly watched his co-star’s movies and studied Willis’ dialogue on his iPod.

“But the most productive thing was just spending time with him. Having dinner, talking about music or whatever and getting to know each other,” Gordon-Levitt said. “That’s when I felt I was learning the most about what I could incorporate into how I was going to play this character.”

Ben Affleck directs and stars in “Argo,” a rescue thriller about the 1979 Iranian hostage crisis. Tom Hanks, Halle Berry and a big ensemble take on multiple roles in “Cloud Atlas,” an epic spanning centuries and genres.

And Tim Burton resurrects an old friend with “Frankenweenie,” his animated update of a live-action short film he made in the 1980s, centered on a kid who pulls a Frankenstein to revive his cherished, perished dog.

“It’s like the first pure relationship you have as a child, if you have a good pet,” Burton said. “Also growing up loving, like, ‘Frankenstein’ movies, there’s something about a boy and his dog and a ‘Frankenstein’ story that doesn’t seem that dissimilar. It seemed like a weird wish-fulfillment connection that just made sense to me.”

Judi Dench’s M steps up in a more pivotal role as spy master to Craig’s 007 in “Skyfall,” in which Bond’s loyalty to his boss is tested by revelations from her past.

A couple of animated tales debut for the holidays: “Wreck-It-Ralph,” with John C. Reilly providing the voice of a second-banana video game character striking out on his own; and “Rise of the Guardians,” an adventure with Santa Claus, the Easter Bunny and other mythical beings battling an evil spirit.

“Twilight” has been a rarity for male-oriented Hollywood, a blockbuster franchise aimed almost exclusively at women. Bill Condon, director of the final two “Twilight” movies, recalls studio hand-wringing over “Dreamgirls,” his musical that became a hit largely because of female crowds.

“People were so concerned about who was going to go see it,” Condon said. “It was like, well, what if you can make a movie that 15-year-old boys don’t care about and you still have an audience? That turned out to be true. I think it’s exciting when not every movie’s got to be aimed at just that one demographic.”

Among holiday comedies, Billy Crystal and Bette Midler play grandparents at odds with their daughter (Marisa Tomei) in “Parental Guidance”; Seth Rogen goes on a road trip with his domineering mom (Barbra Streisand) in “The Guilt Trip”; and Paul Rudd and Leslie Mann revisit their marital woes as they reprise their “Knocked Up” characters in Judd Apatow’s “This Is 40.”

Hugh Jackman, Russell Crowe and Anne Hathaway team for a big-screen adaptation of the stage musical “Les Miserables,” based on Victor Hugo’s classic. A scheduling conflict forced Hathaway out of an earlier movie musical, “The Phantom of the Opera.” She now counts it a blessing, saying “Les Miserables” more than compensates.

“I don’t know if I would have gotten ‘Les Mis’ if I had done ‘Phantom,'” Hathaway said. “So maybe it was just the universe’s way of protecting me and getting to play a superior part.”