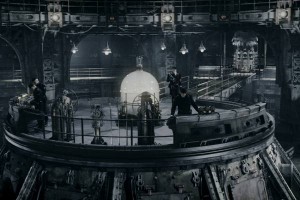 Following in the footsteps of Quentin Tarantino’s Inglourious Basterds, here’s another comedic reimagining of the history of Nazi Germany. But where Tarantino’s Nazi-hunter lark stayed relatively grounded in reality, Finnish director Timo Vuorensola goes off the deep end with a delectably demented plot and unabashed B-movie performances in Iron Sky.

What if, the Finnish-German-Australian co-production asks, a group of renegade Nazis had eluded capture at the end of the Second World War and set up camp on the “dark side of the moon?” Vuorensola is no stranger to such themes, as evidenced by his three-part Star Wreck series, and his forthcoming film, I Killed Adolf Hitler, scheduled for release in 2013.

Iron Sky is set in 2018. When the Sarah Palinesque, Stairmaster-obsessed President of the United States (New Zealand’s Stephanie Paul) sends a shuttle to touch down on lunar soil to boost her ratings, the astronauts butt helmets with the “Fourth Reich.”

The sole survivor, black astronaut/model James Washington (Christopher Kirby), comes into contact with the alien Nazis, who take his arrival as a sign that the time is right to return to their native Earth and attack.

They are led by commander Klaus Adler (Götz Otto), who reasons that he and Nazi Earth specialist Renate Richter (blond bombshell Julia Dietze), gratuitously stripped to her undergarments in an early scene) are destined to be married due to their genetic compatibility. She, meanwhile, is hot for Washington despite his black skin, the likes of which she has never seen.

Her mad-scientist father (Tilo Prückner) goes so far as to “correct” Washington’s pigmentation problem. The feces hits the ventilation when Adler, Richter and Washington land on Earth as part of a recon mission for the eventual invasion.

It’s all extremely silly. The president’s campaign posters show her and Washington beneath the slogan, “Black to the moon? Yes she can.”

Adler actually utters the line, “Bring me to your leader.”

Richter’s favourite movie is Charlie Chaplin’s Hitler send-up The Great Dictator, of which she only had a truncated copy on the moon. When she sees the full version on Earth, she realizes that perhaps her Nazi heritage isn’t all it’s cracked up to be.

Peta Sergeant shines – in ridiculously overacted fashion – as campaign manager Vivian Wagner, who recruits the Nazis to push the president’s popularity over the top. It all builds to the requisite war of the worlds. And while not every moment of this film is as wacky as its premise, it’s an entertaining ride.