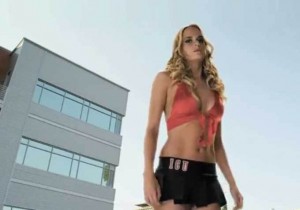 Roger Corman should need no introduction. Without him, independent film in the United States would be an entirely different entity, if it would even exist at all. As a director, he was responsible for a classic series of Edgar Allan Poe adaptations in the early 1960s, among many, many others. As a producer he gave early-career breaks to some of the most storied names in American cinema: Coppola, Scorsese, Bogdanovich, Sayles, Demme.
And, above all, Corman maintained a steadfast commitment to making fun, profitable pictures, of which he has made literally hundreds over the course of his career, now in its seventh decade. His latest film as a producer stars Jena Sims as aspiring college cheerleader Cassie Stratford who, you know, grows to a giant size after taking an experimental performance-enhancing drug, and premieres on Epix this Saturday, August 25th at 10pm. Indiewire caught up with Corman on a recent afternoon for a chat about this most recent project, his career in general, and matters philosophic.

Roger Corman
This question will probably answer itself — it certainly would for me — but why “Attack of the 50 Ft. Cheerleader”?

The idea was originally Epix’s, and I had worked with a friend of mine who had produced the original “Attack of the 50 Foot Woman.” I had designed the ad, which is sort of a classic — it’s in the Museum of Modern Art’s permanent collection — so they knew I had some connection with that, and I’m just on good terms with them.

They just asked me if I would like to make it. I said yes, for two reasons: one, I thought it would be a fun project, and it was, and secondarily, I had never worked in 3D before. I thought there’s so much going this way in the industry, I’d better find out and this would give me a chance to learn. So the picture worked out very well on both bases.

It’s a kind of picture that at the same time it feels very modern, it feels in the best ways like a throwback, in terms of it being the kind of T&A comedy from the 70s and 80s, was that a conscious decision to bring back that kind of aesthetic?

“Sometimes you come up with something creative instead of a lot of money.”
The picture seemed as though as it was made for a fairly modest budget, which is something your work has been known for. Is it strictly a practical choice, or are there some aesthetic benefits to working within modest means?

It’s primarily a practical choice. We had a deal with Epix, we knew exactly how much money they were giving us. We retained the foreign rights, so it was just sort of a calculation as to what sort of budget, putting all these factors together, should “Cheerleader” represent.

Sometimes it’s just a problem. But sometimes, as you say, you come up with something creative instead of a lot of money. There are ways to solve problems in picture-making that are creative. Matter of fact, I can go all the way back a long time ago — I made “Machine-Gun Kelly,” around 1959 or something like that, the first film that starred Charlie Bronson.

I was shooting on the backlot at Warner Bros, which had a period feel. There was no interior of a bank, and he was robbing a number of banks. And I didn’t have money to build an extra set. So what I did, I put a flat inside the door and put shadows—I had everybody act in front of a camera which was rigged with lighting on these flats, so you saw the whole robbery take place in silhouette instead of actually inside the bank, which I would have done if I’d had more money.

I got a lot of critical attention for the interesting and creative way I shot that bank robbery.

There are a couple examples even in “Attack of the 50 Ft. Cheerleader” — when Cassie starts to get bigger from the serum or whatever it is, before she gets to her final size, the camera sort of cheats it and shows, kind of hiding the fact that she was really the same size. How were some of those shots accomplished?

Those were accomplished primarily by computer graphics, and there was a problem there, which is each computer graphic creation cost a certain amount of money. So that when you start up with the creation of the 50-foot woman, then you can ride with that all the way through the rest of the picture. But if you’re going to show individual size changes, it costs a great deal of money for something that’s only on the screen only 10 or 20 seconds, so we did cheat a bit on those intermediate sizes in order to get to the full size right away.

When exactly did you make the transition into doing more TV?

Starting about 20 years ago, around 1990, the major studios began to dominate more and more of the theatrical releases and the independents got less and less time. And I’d say within that 10-year period, from the early 90s to the early 00s, was a major transition for independents, in which each year we saw our share of theatrical grosses or playing time diminish until around the year 2000, when we simply abandoned, closed our theatrical distribution arm.

There just was no, and is no, theatrical distribution for low-budget independent films except for an occasional film like “Paranormal Activity.” Every now and then one will come up. You can’t make, as we used to, 10 or 15 pictures a year and assume that all will go theatrically. We would hope that one or two would go theatrically, and the odds on that are just not good. So we moved from theatrical, plus television and everything else, to DVD, and DVD picked up the slack for a long time, until about a year or so ago when DVD started to decline, and we started to move to cable television.