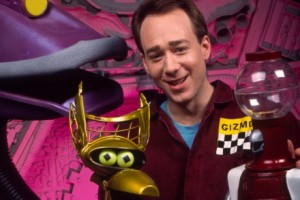 Is there anything worse than one guy talking to a movie screen, ruining the viewing experience for everyone? Get a group of people together talking to the screen, however, and suddenly you have something like a party — a brand-new experience that potentially emphasizes camaraderie as well as comedy.

That’s what Joel Hodgson learned in the late 1980s when he created “Mystery Science Theater 3000,” one of the most beloved — and surprisingly durable — cult TV shows ever. (Time magazine once called it one of the 100 best TV shows of all time.) Well into the third decade of his movie-riffing career, he is exploring the way clever criticism might empower viewers to watch more movies and television shows more actively.

The show began in the late 1980s when Hodgson found some bad movies in the vaults at KTMA in Minneapolis, built two robot puppets out of a gumball machine and a bowling pin, and starting riffing on movies in real time. The premise of the show was simple, sort of: He was trapped in a spaceship orbiting the Earth, while two mad scientists made him watch truly wretched cinema in an experiment that would somehow help them conquer the world. The aesthetic was homemade and decidedly meta.

On early episodes at KTMA, the cast and crew were still trying to figure out the nature of riffing, but Hodgson’s sleepy-headed humor — a mix of the funniest kid at the sleepover and your stoner college roommate — made him an ideal host for a show that recycled old movies into something new, funny, smart — encyclopedic in its pop cultural knowledge. It became a national sensation once it moved to Comedy Central

The show ended in 1999 after 10 seasons and two hosts (the affable Everyman Michael J. Nelson replaced Hodgson in 1993), but it found new life on YouTube and especially on DVD. Shout! Factory recently released Vol. 24 in an ongoing series of four-disc box sets, and it may be the best and most diverse collection yet: two Japanese movies from the ’80s, a Finnish fantasy film, and a Mexican “luchador” action pic.

Of course, Hodgson didn’t invent the idea of movie riffing, which has been around as long as there have been movies. People interact with films on a gut level, whether they’re yelling “don’t open the door!” at a horror-movie heroine or rolling their eyes at the implausibility of an action-movie stunt. According to Hodgson, it’s a natural urge, one that empowers the viewer and potentially improves the viewing experience. And after 12 years away from it, he’s happy to be riffing full-time now. “I love repurposing stuff,” he says. “This was the job I was born to do.”