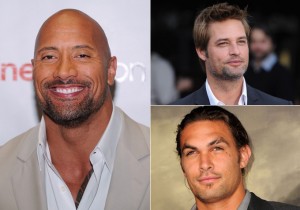 With “The Expendables” and “Red” bringing the old people B-movie thing back into vogue, and while those films wink at ’80s action movie conventions, “Dan Mintner: Badass For Hire” drives a truck through them. And who better to get on board than Dwayne “The Rock” Johnson?
While it’s early days and he’s only loosely attached, should it go forward and shoot in 2013, Johnson would play the title role, and according to ScriptShadow, he spends the opening sequence of the movie taking out a drug cartel by kicking them all in the balls. And that’s just the beginning for a guy who shaves his pubic hair with a machete. The story would revolve around the gun for hire getting called into action when “his old Special Forces Commander, Winthrop, now the president of a multi-billion dollar company, is kidnapped. He partners up with Victoria, Winthrop’s daughter, and the two blaze a trail trying to find him, constantly bumping heads with the insufferably clueless FBI.” The script, was bought way back in 2008 by New Line has been knocking around for a while, at one point had Phil Claydon of “Lesbian Vampire Killers” fame attached to direct, but let’s hope that changed because that movie was awful. [The Wrap]

Oh, we’re calling it “Ten” again? Previously known as “Breacher,” but first known by its numerical title, David Ayer’s latest cop flick continues casting up and has now added “Lost” star Josh Holloway. The actor has yet to cash in on his small screen fame, appearing for about ten seconds before dying in “Mission: Impossible — Ghost Protocol.” With with this flick and the currently lensing “Paranoia” with Liam Hemsworth, Harrison Ford and Gary Oldman, hopefully he’ll be spreading his wings a bit more. In “Ten,” he’ll play one of the DEA team who knock off a safe house of a drug cartel, who think they are in the clear, until they all start dropping off. Arnold Schwarzenegger, Sam Worthington, Terrence Howard, Joe Manganiello, Dawn Olivieri, Malin Akerman, Olivia Williams and Mirielle Enos round out the cast for the film will start lensing in October. [Variety]

Remember when Jason Momoa was given the rising star award at CinemaCon in 2011? That was pretty hilarious. Anyway, the former “Conan” and “Game Of Thrones” star continues to find work, and has come aboard along with Merritt Patterson in “X-Men” and “X2” scribe (and the voice of Solid Snake) David Hayter’s directorial debut “Wolves.” Led by Lucas Till, the film follows a werewolf who is falsely accused of murdering his parents and is forced to go on the run. He winds up in a town named Lupine Ridge, which abounds in the supernatural and will help him learn about his past. Momoa will play the villain and we presume Patterson has the love interest role. Production begins this fall. [Variety]